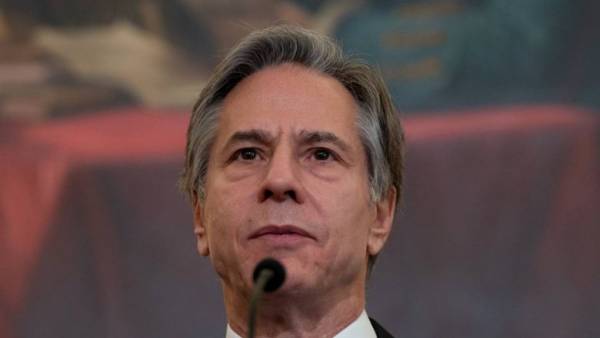 WASHINGTON, December 30 & nbsp;/TASS /. US Secretary of State Anthony Blinken discussed with & nbsp; French Foreign Ministers Jean-Yves Le & nbsp; Drianne, Germany Annalena Berbock and & nbsp; Great Britain Elizabeth Truss the coordination of approaches to & nbsp; the situation around & nbsp; Ukraine and & nbsp; a joint response & quot; in the & nbsp; case of further aggression & nbsp; from the & nbsp; side of Russia. & Nbsp; This is stated in & nbsp; a written statement by the head of the State Department's press service, Ned Price, released on & nbsp; Wednesday.

“ They discussed the importance of continuing coordination to & nbsp; contain any further Russian aggression against Ukraine and & nbsp; reaffirmed the existence of a consensus among allies and & nbsp; partners to ensure widespread consequences and & nbsp; serious damage to & nbsp; Russia for & nbsp; such actions & nbsp;, & nbsp; & mdash; says the & nbsp; text.

The Secretary of State and & nbsp; and his colleagues also discussed common concerns about the pace of Iran's nuclear program, as & nbsp; and & nbsp; Tehran has less time to & nbsp; & nbsp; to return to the & nbsp; JCPOA [Joint Comprehensive Action Plan for the Iranian Nuclear Program & nbsp; & nbsp; , & nbsp; & mdash; Price also reported. He & nbsp; noted that & nbsp; the topics of Lithuania's relations with & nbsp; China and & nbsp; the situation with & nbsp; organization of elections in & nbsp; Libya were discussed about & nbsp; possible Russian invasion of & nbsp; Ukraine. The press secretary of the President of the & nbsp; RF Dmitry Peskov called such information empty and & nbsp; groundless escalation of tension. He & nbsp; emphasized that & nbsp; Russia is not & nbsp; for & nbsp; who is not & nbsp; is a threat. While & nbsp; this he & nbsp; did not & nbsp; ruled out the likelihood of provocations to & nbsp; justify such statements and & nbsp; warned that & nbsp; attempts to resolve the crisis in & nbsp; southeastern Ukraine would have the most serious consequences.