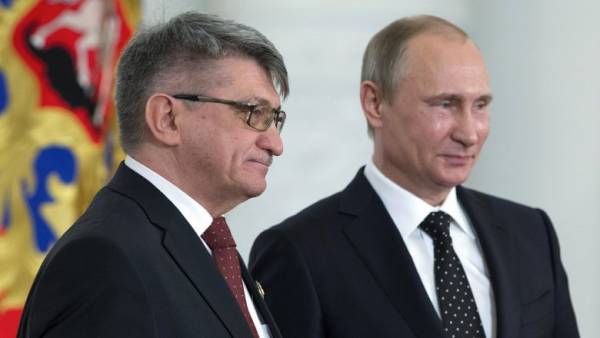 Russian President Vladimir Putin entered into a polemic with & nbsp; director Alexander Sokurov, who declared that the country was & nbsp; nbsp; nbs In the course of the debate, Putin made a remark to the director, recalling that the & nbsp; meeting of the HRC & nbsp; & mdash; this is not a & nbsp; discussion, but an & nbsp; exchange of views, otherwise it will turn into a & nbsp; talk show. Presidential press secretary Dmitry Peskov told the Daily Storm that & nbsp; Sokurov's remark was unprofessional and & nbsp; therefore provoked a harsh reaction from Putin.

The president reacted rather harshly, because the director, unfortunately, was very unprofessional and without knowledge of the subject began to touch on very important, delicate topics. Dmitry Peskov

“ This is something that the president does not & nbsp; tolerate. But & nbsp; he & nbsp; directly to him [Sokurov] about & nbsp; said this & raquo;, & nbsp; & mdash; added a Kremlin spokesman.

The European Court has challenged the Caucasian tradition

On December 9, at the & nbsp; meeting of the Council for the & nbsp; Development of Civil Society and & nbsp; Human Rights (HRC, held in a videoconference format, Sokurov turned to & nbsp; Putin. He told the head of state that & nbsp; the republics of the North Caucasus, allegedly offering to let go who & nbsp; does not & nbsp; want to live with & nbsp; Russia.

Sokurov told, in & nbsp; in particular, about the & nbsp; protests in & nbsp; Ingushetia due to & nbsp; the transfer of a part of the republic's territory to Chechnya, listing the names of the arrested protest leaders and & nbsp; calling for their release. The director suggested that & nbsp; in the & nbsp; federation of “ Russians, many begin to dislike ''. “ They want to part with & nbsp; & nbsp; & mdash; he argued, referring to the & nbsp; opinions of interlocutors from the & nbsp; Caucasus. “ Let's release everyone who & nbsp; no longer & nbsp; wants to live with & nbsp; us in & nbsp; one state & nbsp;, & nbsp; & mdash; concluded Sokurov.

However, the Russian leader did not & nbsp; agree with this point of view. According to & nbsp; Putin's opinion, from & nbsp; Sokurov's part is “ not & nbsp; a speech, but & nbsp; a manifesto, a set of fears that & nbsp; some & nbsp; part of our citizens ''. The President noted that the & nbsp; vote on the & nbsp; amendments to the & nbsp; Constitution proved that & nbsp; separatism in & nbsp; Russia no one wants & nbsp; including the Chechen people.

Is the Russian people interested in the collapse of the Russian Federation? Do you want to turn us into Muscovy? This is what NATO wants to do. Vladimir Putin

& laquo; Dagestan & nbsp; & mdash; it is a multinational republic. What do you offer? Divide the whole of Dagestan or Karachay-Cherkessia? We have 2000 territorial claims in the & nbsp; country. Dear Alexander Nikolaevich, do you & nbsp; want a repetition of Yugoslavia on & nbsp; our territory? & Raquo; & nbsp; & mdash; the Russian leader turned to & nbsp; Sokurov.

With this, the member of the HRC tried to insert a remark about & nbsp; the Constitution, which is “ a hundred years old '', but Putin urged him not to & nbsp; turn the conversation into & nbsp; talk show: & laquo; Calmly! & Nbsp; we & nbsp; same & nbsp; now with & nbsp; you are not & nbsp; discussion. & Nbsp; we have an exchange of views, and & nbsp; then & nbsp; we & nbsp; now we will turn into & nbsp; some kind of talk show and & nbsp; we will interrupt each other without & nbsp; stop & raquo ;.

The note is being supplemented.