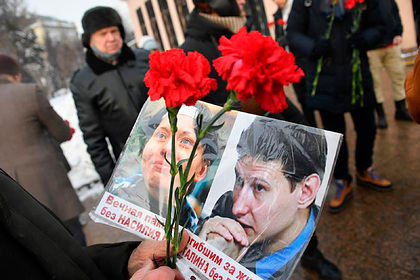 Criminal case of former members of the neo-Nazi extremist group Nationalists ”(BORN) Nikita Tikhonov and Yevgenia Khasis, found guilty of the murder of lawyer Stanislav Markelov and Novaya Gazeta journalist Anastasia Baburova, committed on January 19, 2009 in Moscow, was sent for revision 10 years after the verdict. This was reported by Novaya Gazeta.

The decision was made by the Presidium of the Supreme Court of Russia, which was convened in connection with the ruling of the European Court of Human Rights (ECHR). In February 2021, he declared the trial held over Khasis and Tikhonov illegal and subject to revision. They decided that the right of the defendants to a fair trial had been violated, in particular, the jury was subjected to pressure and delivered a biased verdict.

The appeal instance will review the case of Khasis and Tikhonov, and the convicts will remain in custody. Petr Zaikin, a lawyer for the Baburova family, indicated that there is no talk of a new re-trial yet.

Human rights activist Stanislav Markelov and journalist of Novaya Gazeta Anastasia Baburova were killed in Moscow in January 2009. Tikhonov and Khasis were detained in November of the same year. In April 2011, a jury found them guilty of the murders of Markelov and Baburova. In May, the Moscow City Court sentenced Tikhonov to life imprisonment. Khasis was recognized as an accomplice and was sentenced to 18 years in prison.