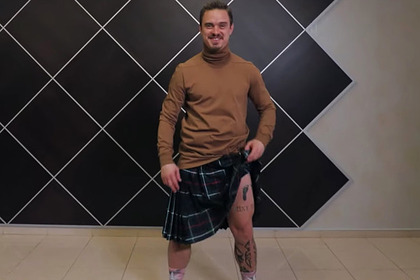 which he wears a skirt in public. He spoke on this topic on the air of the Sport Fashion show on the Sporthab YouTube channel.

The Russian footballer discussed his own style with correspondent Alexei Yaroshevsky in the broadcast studio. So, one of the athlete's images consisted of a sand turtleneck and a pleated kilt (an item of men's Scottish national clothing – approx. “Lenta.ru” ).

Yeshchenko admitted that he wanted to go out in the summer on the street in the described outfit, but changed his mind at the last moment. The host of the program suggested that the footballer did not wear a kilt to avoid criticism from the patriarchal Russian society, but the hero of the article replied that he didn’t care about the opinion of others.

“Let them say what they want. The main thing is that you feel comfortable, comfortable and like everything, then please (…) It will be good in the summer, “the Spartak defender explained and added that he likes bright oversized clothes. According to him, he is careful with the choice of items, paying attention to their quality, rather than belonging to the brand.

In November, men attended the MTV Awards in women's skirts and dresses. For example, Next agency fashion model William Ernult appeared on the red carpet in a black outfit, which consisted of a long sleeve, corduroy jacket, pleated midi-length leather skirt and rough boots.