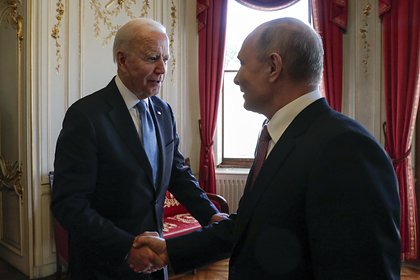 Russian President Vladimir Putin and his US counterpart Joe Biden have begun bilateral talks , which for the first time are held in the format of a teleconference. It is reported by TASS.

It is noted that the conversation of the politicians takes place via a special secure video link. The Kremlin said that it was created during the previous administrations, but today it is being used for the first time.

The Russian leader contacted the American president from his residence in Sochi. Putin arrived there from New Delhi, where he was on a visit. The presidents' current contact is the fifth since Biden took office. Putin and Biden talked on the phone three times, and also met in Geneva on June 16.

Earlier it was reported that the talks between the state leaders would be held in a closed mode for the press. Kremlin spokesman Dmitry Peskov said that Putin and Biden will discuss bilateral relations between Moscow and Washington, which are in a deplorable state. According to him, politicians will also touch on the topic of tension around Ukraine and the advancement of NATO forces to the borders of Russia.