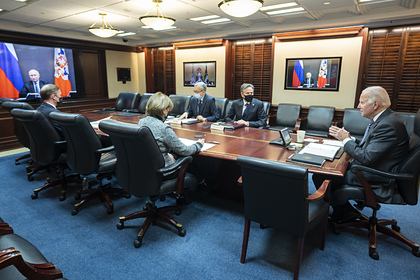 time of negotiations via video link with Russian leader Vladimir Putin. The photo was posted on the official Twitter account of the American presidential administration.

The photo shows that in addition to Biden, four other people were present during the conversation, including the head of the US Department of State Anthony Blinken.

Previously, White House listed the main topics that were raised during the talks between the presidents of Russia and the United States. Washington indicated that Biden voiced the concern of the United States and European allies with the build-up of Russian forces near the borders of Ukraine.

The meeting was held via a special video link. The Kremlin said that this line was created during the previous administrations, but today it is being used for the first time. The first footage of the politicians' communication was shown to the journalists, but then the meeting was held in a closed format.