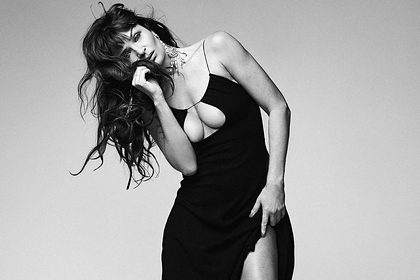 Singaporean version of fashion magazine Harpers Bazaar and thrilled fans. A corresponding series of shots and comments from netizens appeared on her Instagram page.

The 52-year-old celebrity starred in several outfits. So, for example, in one of the frames she poses in a black latex bodysuit, gloves, high-heeled shoes and a wide-brimmed hat. In another photo, the model is captured in a black midi-length dress with a bosom cutout and boots of the same color. Christensen was also photographed in a red low-cut dress and a black crop top paired with beige high-waist briefs.

Fans have appreciated the model's appearance in the comments below the pictures. “Stunning!” Over the years, you only become more beautiful. Congratulations on the cover! ”,“ Incredible figure, ”they praised.

In October, Helena Christensen starred in a candid photo shoot for the cover of the Scandinavian version of fashion magazine Vogue. So, in one of the photos she posed in a striped sweater without pants, holding a dog in her hands, and in the second – in a lace bodysuit near the wall with paintings. The model was also photographed topless in coral trousers.