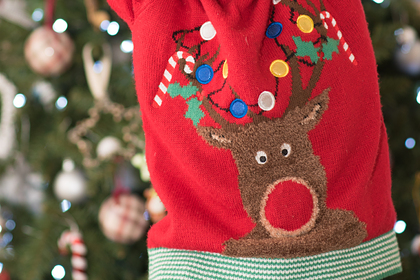 Artist made the world's most expensive ugly sweater … This is reported by the Mirror.

According to the publication, throughout his life, 33-year-old Briton Aidan Liban saved money for materials to create a jumper. He spent seven thousand pounds sterling (about 685 thousand rubles) collected in this way on a decorative deer inlaid with precious stones, jewelry in the form of stars made of silver and diamonds, natural Italian silk, gold threads, as well as thousands of Swarovski crystals.

The man plans to sell a ready-made jumper with the image of a deer in a cap of Santa Claus and snow for 30 thousand pounds (almost three million rubles). It is noted that before him the most expensive ugly sweater in the world was considered the product of the Tipsy Elves brand, which was adorned with 24 thousand crystals. It went on sale at a price of 24 thousand pounds sterling (2.3 million rubles).

Liban admitted that the idea to make such a sweater with his own hands came to him in 2020 while working for a charitable organization. At the moment, the artist hopes to bail out a five-figure sum for it, part of which he promised to donate to the England Health Service (NHS).

In December 2020, an elderly teacher found an obscene print on a new Christmas sweater. Carolyn Hallam, 53, bought her festive reindeer outfit at a garage sale. Trying on the thing at home, she found that the deer depicted on the clothes were mating. She said she was relieved to see this before deciding to wear a new outfit to her primary school classes.