The Museum of Old Believers in Kazan celebrates its first year 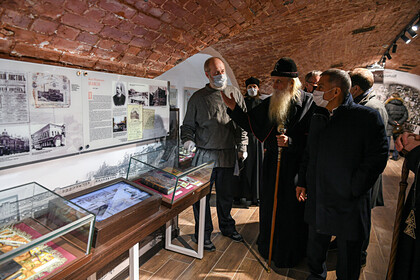 The only museum of Old Believers in Russia, which is located in Kazan, celebrated the year of its existence. IA “Tatarinform” told the Russians about the exhibits of the museum, as well as its history.

The museum is located on the basement of the cathedral of the Kazan-Vyatka diocese of the Russian Orthodox Old Believers Church in Kazan. The temple was founded at the beginning of the 20th century and consecrated in 1909. However, with the advent of Soviet power, in 1920, it was closed. Then, for most of the last century, the archive of the TASSR was located here. The church was returned to the Old Believers only in 1996.

Among the exhibits of the museum are ancient cast icons (most of them were transferred to the collection from the descendants of Old Believer merchants), utensils, priests' vestments, as well as liturgical books with illustrations and freehand patterns on the pages. As the author of the article notes, the weight of some books reaches four to five kilograms.

It is noted that the museum is quite popular and is often given gifts. So, once a gift from the singer Grigory Leps was transferred to the collection – an engraving by Jean Julie Eleanor de Lespinas, which captures a view of Kazan in 1767. “Together with her, they say, the abbot of the Moscow church passed on a request to sell one of the old books, but he never got it,” the publication says.

In September, Old Believers from the village of Nizhniy Uslon (Tatarstan) asked local authorities restore the Church of St. Nicholas the Wonderworker, founded in 1908. Metropolitan of Moscow and All Russia of the Russian Orthodox Old Believers Church Korniliy (Titov) turned to the State Counselor of the Republic of Tatarstan Mintimer Shaimiev for help and assistance.