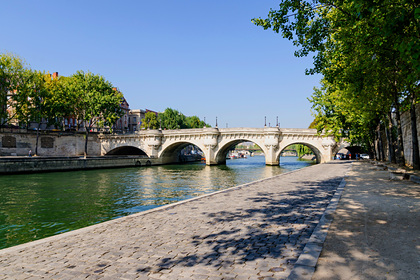 Wastewater. The project aims to limit the entry of polluted water into the Seine, which will make the main river of the French capital suitable for bathing, Bloomberg reports.

An underground water storage is under construction under a public garden in the vicinity of Austerlitz Station, with a capacity of 46,000 cubic meters – enough to fill 30 Olympic-sized swimming pools. After the rains, water from storm runoffs will flow into this reservoir, connected by underground pipes with sewers on both sides of the Seine, and then gradually distributed from it through the sewers throughout the day. According to the city's chief water engineer, the reservoir is “an extraordinary project of exceptional size, unparalleled in a densely populated and cramped city like Paris.” The project will cost 1.4 billion euros. It will be completely invisible on the surface, and there will be enough soil in the garden for planting trees.

According to the authorities, the reservoir is not able to fully protect the Seine from the ingress of sewage: about 100 thousand cubic meters per year will still be poured into the river, making it temporarily unsuitable for swimming after heavy downpours. However, this volume of pollution is much less than the existing one. Now the 19th century sewer system mixes sewage and rain flows, and during rain, when the amount of liquid in the pipes exceeds the permissible level, dirty water is discharged into the Seine through 44 storm drains.

In the purified Seine, it is planned to equip swimming pools for the Olympic swimming competition. It is expected that the possibility of swimming in the river in the middle of the city for residents of the French capital will continue after the games. In September, a state project appeared in Paris, according to which a studio apartment with a view of the Seine can be rented at the price of a one-room apartment in Moscow.