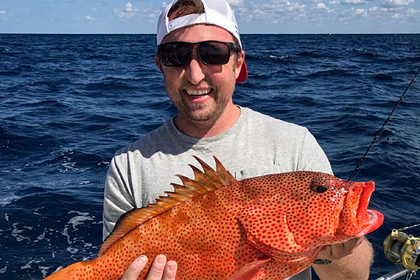 A North Carolina resident caught a large red stony bass and set a state record. This is reported by the Outdoor Life website.

Fisherman Matthew Parr, who surprised the fish in the area of ​​Cape Lookout, came across a fish 54.6 centimeters long and 44.6 centimeters thick, weighing 3.22 kilograms, which is only slightly inferior to the world the record by the International Sport Fishing Association (IGFA) – a four-kilogram red rock bass caught in 1994 near Ascension Island in the Atlantic Ocean.

North Carolina has registered a record for catching red rock bass for the first time. The category was introduced specifically for the Parr catch, recognized as exceptionally large for this state.

In November 2020, it was reported that a record blue catfish was caught in Lake Alatuna in the US state of Georgia. The bait was a 900-gram channel catfish caught by a fisherman at the beginning of his fishing trip.