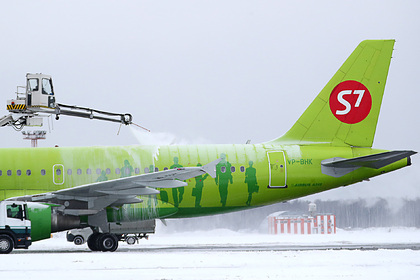 The plane of flight S7 Magadan – Novosibirsk made an emergency landing in Irkutsk, could freeze up due to the poor quality of the reagent with which it was treated before departure. This was stated by Honored Pilot of the USSR, former Deputy Minister of Civil Aviation of the USSR Oleg Smirnov in an interview with Izvestia.

According to the expert, it is worth checking the composition and consistency of the fluid used for compliance with the standards. In addition, sometimes airlines try to save money by deliberately dousing the planes not completely, because the liquid is very expensive.

Also, Smirnov noted, the reagent could be incorrectly applied, not completely clearing the vessel from snow and dirt.

The emergency landing of an aircraft flying from Magadan to Novosibirsk became known on Friday, December 3. The incident happened the day before, on December 2. Almost immediately after takeoff, the autopilot suddenly turned off, and a second later turned on again.

The aircraft switched to direct control mode, without the participation of the autopilot. Then the pilots saw a signal about icing of the engines, the board began to “fall through”, dangling from side to side. They managed to land him in Irkutsk.

Passengers described the maneuver with the phrase “terribly scary.” The aircraft crew was temporarily suspended from work.