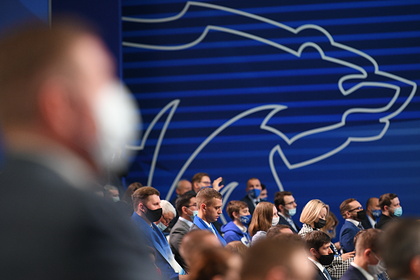 last two years. You can even talk about a change in the ideology of the party. If earlier United Russia concentrated on the consolidation of the elites and the country, stabilization and development of the economy, now it is focused on concrete assistance to people. Pavel Danilin, director of the Center for Political Analysis, said this to Lente.ru, commenting on the results of the third stage of the 20th anniversary congress of the United Russia party.

“The accents of the party have shifted to such priorities as caring for people and social protection of a particular person. Now it is obvious that against the background of the development of the pandemic in the party, there has been a significant shift towards ensuring the social function of the party – a huge number of United Russia volunteers have appeared. In general, we can say that during the pandemic “United Russia” and only she, only this party, turned into a huge volunteer center to help specific people, “- said Pavel Danilin.

Many party volunteer projects were organized, and ordinary party members – volunteers worked independently to help the sick in a variety of ways, the political scientist emphasized, who drew attention to the fact that a lot of other volunteers had joined the United Russia volunteers and gained access to its resources.

“Large funds were spent on the purchase of food, food sets were delivered to citizens who were in isolation in quarantine, and medicines were delivered. Participants of the #WeTogether project have collected and continue to collect donations that are sent to support doctors. Someone brought doctors to the sick, someone, like Zhanna Ryabtseva in the Sverdlovsk region, organized the supply of food to doctors employed in the red zones, says Pavel Danilin. – Delivery of medicines to patients with COVID-19 was carried out. The names of United Russia volunteers can be listed endlessly – there are a lot of them. And they did a ton of invaluable work. Many of the United Russia volunteers were elected to the State Duma in the last elections. ”

According to the political scientist, the results of United Russia’s volunteer activities turned out to be grandiose – in Russia more than 10 million people received support from party volunteers, and this is a colossal figure. The party had hot lines dedicated to pandemic issues. “But the #WeTogether project included not only party members, but many, many other volunteers who were not part of the United Russia party. And in this context, the project turned out to be global. Moreover, this is a continuing project, it has not ended, which continues to work now, “- said Pavel Danilin.

The United Russia party has carried out and continues to carry out an unusual unique social project in our history, in the history of Russia, Pavel Danilin is sure. “This is absolutely concrete work to help specific people. Therefore, it is not surprising that the issue of volunteer movement in the party is at the center of the agenda of the 20th anniversary congress of United Russia. The support of the party is received by those who themselves are directly involved in charitable and volunteer work, and they do this on an ongoing basis. These are such real optimists of United Russia. Of course, the party's leadership counts on the fact that this activity of United Russia will become an example for approved behavior in the entire Russian society, push new people, the public as a whole, to participate in volunteer work, ”concluded Pavel Danilin.

< p>United Russia was the first of the major socio-political forces to support the volunteer movement #We areTogether, took an active part in it. Many members and supporters of the party literally from the first days, weeks of fighting the pandemic, became volunteers: they helped doctors and nurses in hospitals and clinics, delivered food and medicine, did everything necessary to make people feel attention and care during this difficult period. Russian President Vladimir Putin spoke about this when addressing the participants of the 20th congress of “United Russia”.

“It certainly cannot be otherwise, because at the center of our policy, our common goals and plans is the person, his needs, his well-being and quality of life. This is an unconditional priority for United Russia as a leading political force, as well as for everyone who is now in this hall, and for hundreds of thousands of our colleagues and comrades-in-arms in all regions of the country, the head of state believes. – Let me emphasize: the highest meaning of being in the United Russia party, working in it is serving people and respecting people, it is protecting, defending and realizing the interests of the citizens of our country. It is gratifying that all the multifaceted activities of the party are committed to solving precisely these tasks, and always, and not only during election campaigns. ”

United Russia volunteer centers will continue to help in the fight against coronavirus until the danger recedes , said the chairman of the party Dmitry Medvedev at the congress. In his opinion, United Russia should not only continue the work of all volunteer structures, but also reformat it in accordance with the current situation.

“Unfortunately, the coronavirus is not receding yet. The fight will be long. We will conduct our work constantly – as long as there is a need for it and as long as we are able to provide people with real help. The directions are already clear to us – this is the current auto-volunteering, assistance in the “red zones”, the delivery of grocery kits and medicines. At the same time, an additional task falls on our deputies, the volunteer asset, and I draw your attention to it – to convey to the largest possible number of people information about the importance of vaccination. This is an extremely important task today, “Dmitry Medvedev said.