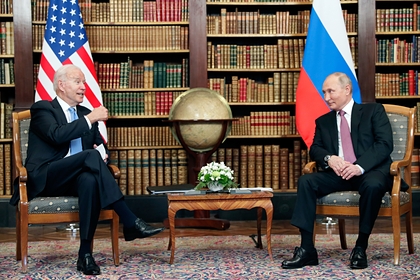 Russian President Vladimir Putin will hold talks with his American counterpart Joe Biden in the evening on Tuesday, December 7th. This was announced by the press secretary of the Russian President Dmitry Peskov.

A Kremlin spokesman noted that the talks will be held in a secure video link. The presidents themselves will determine the time needed for the conversation, he said.

The White House announced that Biden plans to highlight concerns about Russian military activities on the border with Ukraine, as well as indicate the United States' commitment to Ukrainian sovereignty and territorial integrity.

US Secretary of State Anthony Blinken also said that Biden would tell Putin that Washington is in the mood for a stable relationship with Moscow. “I think that when they talk, the president will set out our serious attitude towards greater predictability and stability in relations,” he said.

The Kremlin also spoke about possible points of the conversation.

< p> Naturally, Ukraine – a lot of controversy around Ukraine

Dmitry PeskovOfficial Representative of the Kremlin

“Naturally, there will be around Ukraine what for us is provocative actions of NATO armed forces near our borders,” said Peskov. He added that this cannot leave Moscow indifferent and causes concern, as well as the need to take adequate measures.

In turn, the aide to the Russian President Yuri Ushakov indicated that in addition to Ukraine, Putin and Biden will discuss, in particular, the situation in Afghanistan, may touch upon the topics of Iran, Libya and Syria, and also talk about the state of bilateral relations, which is currently unsatisfactory. In addition, he added, Putin and Biden are likely to touch upon the implementation of the agreements they reached during their previous meeting in Geneva. According to the aide to the Russian leader, in general, the presidents have many issues on the agenda, including those related to the coronavirus pandemic and climate change.

At the level of the diplomatic departments

On the eve of the summit talks, the heads of the Russian and US foreign ministries Sergei Lavrov and Anthony Blinken held their meeting. On the sidelines of the meeting of the OSCE Foreign Ministers Council, they discussed the situation with the work of the Russian and US embassies, as well as the normalization of the crisis in southeastern Ukraine and the process of resuming the Iranian nuclear deal.

Equation of security. Sergei Ryabkov on how the meeting between Putin and Biden will help resolve the contradictions between Russia and the United States 11:01 – 2 December

New order. Wars, the power of women and the path to eternal life – the most incredible economic forecast for 2022 after meeting at the Russian Foreign Ministry.

Past and future meetings

Putin and Biden met in person on June 16 in Geneva at the Villa La Grange. The politicians talked for three and a half hours; both sides called the summit productive. Nevertheless, Putin also mentioned the regressions that are occurring in relations between Moscow and Washington, despite the direct dialogue. The President described them with the words “one step forward – two steps back.” 2022 year. At the same time, the interlocutor of the publication accurately named the date of the video conference call of the presidents.