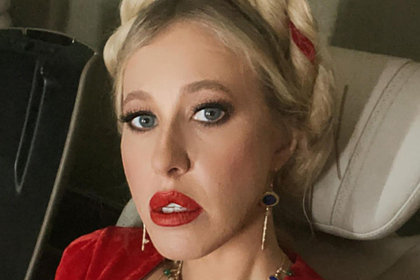 TV presenter Ksenia Sobchak ”And former Prime Minister of Ukraine Yulia Tymoshenko at the Russia in Vogue gala dinner in support of Russian fashion. The corresponding photos and comments appeared on the journalist's Instagram page.

The 40-year-old celebrity posted a selfie in which she showed off her new hairstyle: she was captured with a “donut” braid, braided around her head and decorated with a red ribbon. Sobchak appeared at the event in a red dress by Russian designer Ulyana Sergeenko with a corset top and a floor-length skirt. She also wore gold-tone necklaces and earrings.

“How do you like the look? I am Russian, I have a braid with me! ” – she signed the post, which got more than 93 thousand likes. Fans began to discuss the appearance of the TV presenter in the comments. “Looks like Yulia Tymoshenko, only an improved version”, “Tymoshenko, is it you?”, “Photoshopped Yulia Tymoshenko”, “Woman with a loaf. So Yulia Tymoshenko was called because of her hairstyle. Kalach on the head. But it suits you, “they said.

In May, Yulia Tymoshenko came to the Verkhovna Rada in a national image. In her Instagram account, the politician posted a photo in which she was captured in an embroidered shirt with a colorful ornament, as well as with her “trademark” hairstyle – a braided “donut” braided around her head.