Prime Minister Golovchenko: in the near future Belarus will introduce counter-sanctions against the West 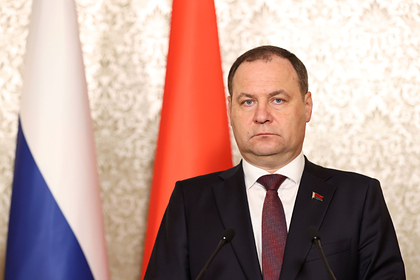 Prime Minister of Belarus Roman Golovchenko announced. According to him, the country's authorities have already prepared and will soon introduce a package of economic responses to the restrictive actions of the United States and the European Union, BelTA writes in its Telegram channel.

“The list will be quite long. These will no longer be so-called asymmetric measures and will not be formal. These will be economic measures in response to the pressure we are exposed to, ”Golovchenko said. He added that the US sanctions imposed on the eve are perplexing. “I would have kicked them out for their incompetence long ago. If some small Borisov enterprise has received the attention of the United States of America, this is probably only a reason for pride for him, “the Prime Minister said.

According to Brian O'Toole, a former employee of the US Treasury Department's sanctions unit OFAC, the new US restrictive measures on the state debt of Belarus will deprive the country of access to attracting dollars on the domestic market. The fact is that the fifth package of American sanctions involves a ban on the servicing of these transactions by American correspondent banks.

Golovchenko announced the introduction of counter-sanctions after a meeting with President of Belarus Alexander Lukashenko on the country's socio-economic development. At the event, the President stressed that the Belarusian economy “is under pressure from outside, unprecedented in scale and depth.”

In mid-November, EU High Representative for Foreign Policy and Security Josep Borrell said that almost billion dollars in SDR (Special Drawing Rights) cannot be cashed in any European central bank. The operation will be regarded as an investment service for the Lukashenka regime, and such services are expressly prohibited by EU sanctions.