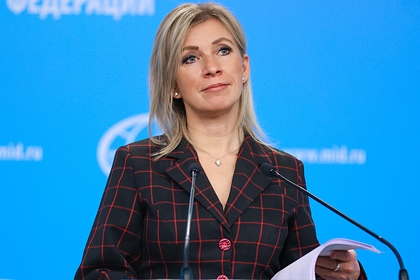 An employee of the Rustavi 2 TV channel Nutsubidze, who was present during the minister's conversation with journalists, began to ask a question in English. Zakharova drew attention to the fact that the request for participation in the conference sounded in Russian.

“Tamara, please excuse me, when you asked to take part in the conference, you spoke Russian,” Zakharova recalled. After that, the journalist asked if this was a problem, to which Zakharova replied: “Well, it's just that there are Russian journalists here. (…) Tamara, please, in Russian, let's go, ”Zakharova emphasized.

Nutsubidze insisted that she wanted to ask a question in English and received advice from Zakharova. “Next time you ask, also in English, okay?” – concluded the representative of the department.

Earlier, Zakharova said that Ukraine's entry into NATO would become a “red line” for Moscow. Her statement concerned the meeting of NATO foreign ministers held in the Latvian capital Riga. Zakharova noted that the meeting demonstrated the North Atlantic Alliance's obsession with imaginary threats to the detriment of a joint solution to the real challenges of our time.