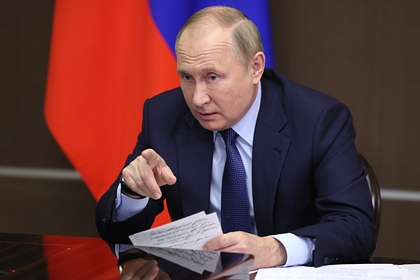 Russian President Vladimir Putin during a meeting on the situation in the coal industry Kuzbass ordered to check the fulfillment of instructions given in 2010 by the then head of state Dmitry Medvedev after the accident in the Raspadskaya mine in the Kemerovo region. The broadcast of the meeting was published on the Russia 24 YouTube channel.

“I was informed, of course, after the appropriate decisions were made in 2010 that all instructions had been fulfilled. We need to see how they are implemented. What exactly was done and how it was done. Let's figure it out, “Putin said.

Earlier during the meeting, he named the cause of the accident at the Listvyazhnaya mine. According to the president, it happened due to a number of safety violations.

Putin also demanded that the law should be “strictly inquired” from those who neglect the safety of workers in mines, putting them at mortal risk, and added, that it is unacceptable to abuse the courage of the miners.

An explosion in the Listvyazhnaya mine in the Kemerovo Region took place on the morning of November 25. As a result, 51 people died, including five mine rescuers who went in search of miners. According to the latest data, 99 Russians were injured: 16 people were hospitalized, 83 are being treated on an outpatient basis.