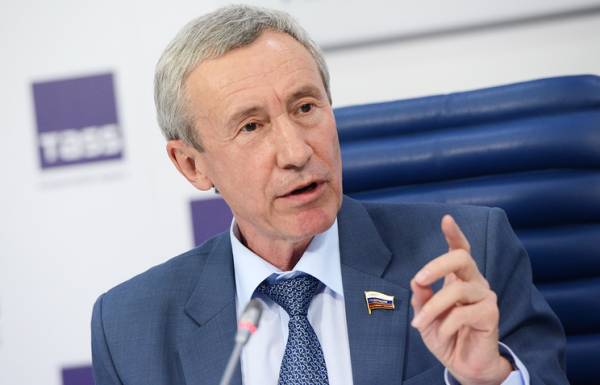 MOSCOW, may 30. /TASS/. Interim Commission of the Federation Council for the protection of state sovereignty presented on Wednesday a special report on the attempts of foreign interference in the process of preparation and holding of presidential elections in 2018. According to the authors of the report, these attempts represent “a massive attack on the Russian electoral sovereignty” and aim “to undermine the stability of the domestic political system to exert external influence on domestic and foreign policy of the Russian Federation, the composition of the authorities of the country.”

According to the head of the Commission Andrei Klimau, a report prepared on the basis of “proven facts”, allows you to talk about the existence of a “coordinated system” of Russian intervention in the electoral processes, which is “effectively governed from Washington” and which “involved many of the structures in Europe”.

To strengthen the protection of the Russian electoral sovereignty the authors of the report recommended a number of amendments to the legislation, including “to secure by law the definition of outside interference in the internal Affairs of the Russian Federation” and include the concept of “undesirable activities” by analogy with the existing concept of “undesirable organization”. It is also expected to strengthen the monitoring of external threats, including monitoring attempts to interfere in regional elections, especially in Moscow, which is scheduled for September this year.

The main areas of intervention

The drafters of the 46-page document analyzed the international activity in the period 2015 to November 2017, i.e. until the date of the official announcement of the presidential election, and at the stage of nomination and registration of candidates for the post of President of the Russian Federation, campaigning and elections, and the post-election period. Based on this information, they identified ten main types of external interference in Russian electoral processes.

Among them, in addition to the above, the authors of the report attributed “the interference by conducting on the territory of the Russian Federation unauthorized research of sociological character in the interests of a foreign state entities at the expense of foreign funding (including funds of the Pentagon), as well as unacceptable use employees of the U.S. mission in Russia.”