SAINT PETERSBURG, may 25. /TASS/. Russian President Vladimir Putin believes that the plane, carrying out flight MH17 and crashed over Ukraine, could not be shot down by a Russian missile. 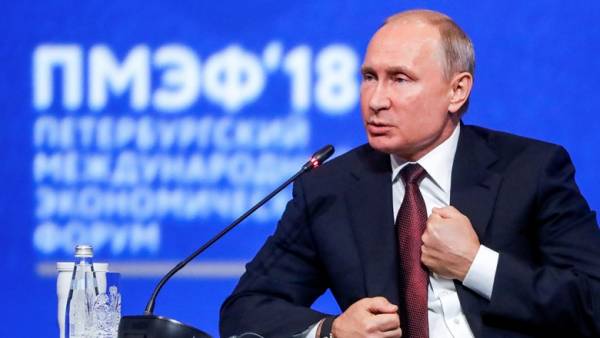 “No, of course not,” — said the Russian head of state on the question whether the downed airliner by a Russian missile. The question was asked during the discussion at the plenary session of the St. Petersburg international economic forum.

He called what happened to MH17 a “terrible tragedy” and called to “always be thinking about the families of those who died, those who died as a result of this terrible disaster.”

“Of course, we will always remember this, but somehow the fact that Ukraine has not fulfilled its obligations under the ICAO — the International organization for civil aviation — and not close the airspace over the territory where the military operations took place, no one remembers” — sorry, Putin.

According to him, “there are different versions of this tragedy, but they are also not taken into account”. “So if there is a full investigation, of course, it would be very difficult to accept the conclusions of the Commission, which operates without our participation,” — said the Russian leader.

Putin recalled other tragic cases, connected with Ukraine. “They knocked down once over the Black sea a Russian plane, which was flying from Israel, and did not admit his guilt. Finally they agreed, but payment and not paid”, — he said. And reiterated: “that is Why we practice the negative, unfortunately, is, as for this particular tragic event, we wish to participate fully in the investigation.”

A passenger plane of Malaysia Airlines, carrying out flight MH17 from Amsterdam to Kuala Lumpur, was shot down on 17 July 2014 in the Eastern Donetsk region, killing 283 passengers and 15 crew members. Parties to an armed conflict in the Donbas region have accused each other of involvement in the tragedy. In the Netherlands set up a Joint investigation team to investigate the incident.

On Thursday on a press-conferences the head of the national criminal police unit of the Netherlands Wilbert Paulissen said that anti-aircraft rocket launcher, which was launched shot down aircraft missiles, could be imported from Russia and belong to the 53rd anti-aircraft missile brigade near Kursk. Dutch Prosecutor Fred vesterbeke noted that a Joint investigation team has made significant progress in the investigation of the crash MH17, but still can not say who and why shot down the plane.

On Friday issued a statement of the Dutch Cabinet, in which Australia and the Netherlands officially accused Russia of involvement in the crash Boeing in Ukraine in July 2014 and intend to bring Moscow to responsibility.

Disaster over the Black sea, mentioned Putin, occurred in October 2001. Then Tu-154, flying from tel Aviv to Novosibirsk crashed in the Black sea, killing 78 people. At the conclusion of the Interstate aviation Committee, the plane was unintentionally shot down by anti-aircraft missile s-200, released by the air defense forces of Ukraine during the exercise.