Peskov: Russia to give flowers is a sign of good taste

SOCHI, may 21. /TASS/. The actions of the President of Russia Vladimir Putin, who presented a bouquet of flowers to German Chancellor Angela Merkel, were motivated by the traditional Russian attitude to this gift, as sign of good taste. This was stated to journalists the press-Secretary of Russian leader Dmitry Peskov. 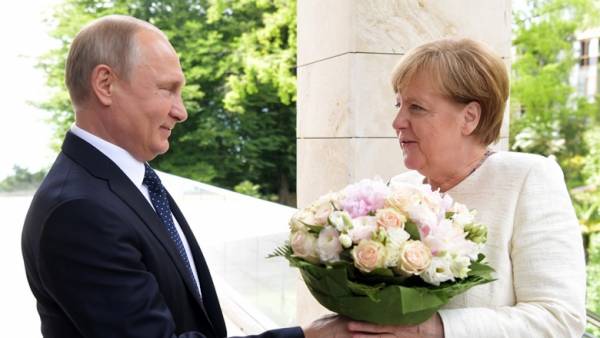 Merkel has visited Russia with official visit on may 18. Putin met her on the porch of the residence “Bocharov stream” and handed her bouquet of cream roses, freesia and other flowers in pastel colours. The Chancellor in response greeted the Russian leader accepted the bouquet and a few times looked at the flowers, appreciating the composition. Despite the fact that neither in this moment nor after negotiations no dissatisfaction with the present German side is not expressed, the German tabloid Bild has published an article in which he called bouquet “insult the dignity” of the Chancellor. In its opinion of the newspaper, gave flowers to Merkel, Putin allegedly tried to emphasize that she is a woman, and thereby to put themselves in a position of strengths.

What a scene. Putin greets Merkel with flowers. She greets him in German (he speaks it). Medvedev Merkel says hi and starts speaking some Russian with him. pic.twitter.com/KQFeY00dfJ