In the Bundestag, said that sanctions against Russia harm Europe

The leader of the left Sahra wagenknecht urged to end the “glacial period in relations with Moscow.” According to her, the rapprochement with Russia in the interests of Europe. 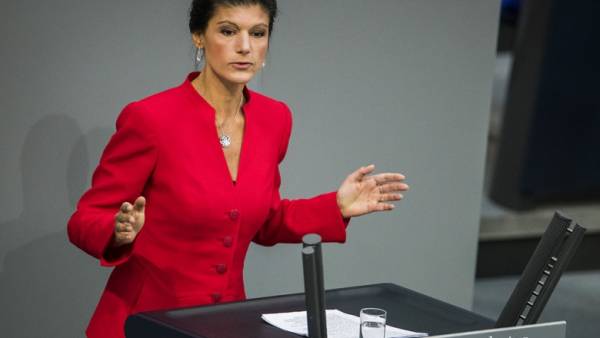 MOSCOW, may 20 — RIA Novosti. Rapprochement with Russia in the interests of Europe as this will ensure the safety and to achieve disarmament, said in an interview with the Neue Osnabrücker Zeitung co-Chairman of the faction of the Left party in the Bundestag Sarah Wagenknecht.

The politician urged to end the “glacial period in relations with Moscow.”

The sanctions mainly harm the European and German companies. So it is in our interests to cancel them.Sarah Agenciescorrection faction of the Left party in the Bundestag

While Wagenknecht said that Germany should continue to criticize the annexation of Crimea to Russia and Moscow’s actions in Syria. “But if the criticism comes from the mouth of those who lead in violation of international law of war, it sounds very hypocritical,” said the leader of the left.

USA, as the politician said, has spent five billion dollars to overthrow the government in Ukraine.

The country still intends to join NATO. Everyone knew that Russia will not wait for a military base in the Crimea would be on NATO territory.Sarah Agenciescorrection faction of the Left party in the Bundestag

In addition, Wagenknecht criticized the increased spending on the Bundeswehr at the fastest pace since the cold war. According to her, the increase in spending on the German army is not associated with homeland defense and the need to undertake operations abroad.

“We put it (Germany — ed.) of danger, when involved in conflicts with the norms of international law the wars for oil and gas,” — said Wagenknecht.