“We can use weapons”: military pilot of the intercepting NATO aircraft

Honored military pilot of Russia, major General Vladimir Popov told TASS on why the West is concerned about the military support and interception of aircraft near the borders of Russia. 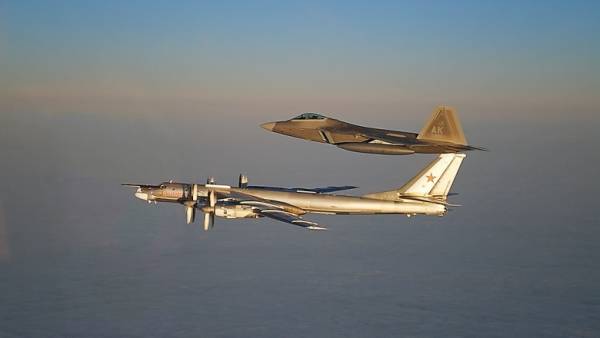 On 12 may, the Russian defense Ministry reported that the strategic missile carriers Tu-95MS and distant anti-aircraft Tu-142 have successfully completed planned flights over neutral waters of the Arctic ocean, the Okhotsk and Bering seas. On a separate route, not approaching closer than 100 meters, two F-22A the U.S. air force for 40 minutes accompanied by Russian bombers. The pilots of American planes behave properly and no aggressive intentions did not show, was informed on may 14 the newspaper “Red star”.

“As the commander of long-range aviation of the Russian air force, Lieutenant General Sergey kobylash, our ground radar to discover the approach of strategic bombers, foreign fighters, inform the crew of our aircraft about the upcoming meeting. And then was installed as the pilots visual contact,” the newspaper said.

Such incidents in the border areas and over neutral waters occur regularly. But foreign media have increasingly published “sensation” about the alleged unlawful interceptions or make rating news about “Russian bears” (so often called the Tu-95 or even Russian pilots) disrupt the peaceful skies of many European countries and the USA. Although in Russia and in allied countries always emphasize that it is common practice and all the pilots always act within international law in a safe and responsible manner befitting.

According to the Russian defense Ministry, over the past five years the long range aircraft of the aerospace forces (VKS) Russia had done almost 180 flights on air patrols in the waters of the Norwegian, North, Black, Japanese sea and Yellow sea in the Western Pacific and northeast Atlantic oceans and in the Arctic zone. According to the chief of the General staff of armed forces Valery Gerasimov, if we compare the achieved results with the similar Soviet times, the intensity of flights of the “dalnik” is maintained at the same level.

According to open sources, in 2016, NATO aircraft in Europe 780 times rose to intercept “foreign” aircraft, with the majority connected with airplanes VKS RF — only 90 cases, the fighters were directed towards the aircraft of other countries. According to German publication Spiegel, a record figure since the end of the cold war, stressing that in 2015, such cases were only 410.

The defense Ministry constantly specify that all flights of aircraft of VC are performed in strict compliance with international regulations use of airspace without violating the borders of other sovereign States. “The safety of our state borders is a priority for us”, — says the honored military pilot of Russia, major-General Vladimir Popov.

Many statements are presented as if the Russian intercept. In neutral waters of the interceptions are not carried out. It support, Yes it is a martial escort, and its purpose is clear — to identify the aircraft, a potential intruder. And this happens not only in Russia but in all countries of the world.Vladimir Popovskiy military pilot of Russia, major General

Recent issues of international relations on cross-border use of airspace for EU countries, USA and Russia have been the most challenging. The level of tension has increased after the reunification of the Crimea with Russia in 2014, and then added, successfully held the Syrian campaign of the Russian HQs. Jealously monitored any movements and actions of the armed forces (especially flying combat aircraft) in the border areas.

You may recall the incident with NATO F-16 fighter, which tried to approach the plane of the Minister of defence of the Russian Federation, when the Tu-154 followed in Kaliningrad. The F-16 flew for the shortest possible distance and retreated only after a Russian su-27 showed him their weapons. In the headquarters of the Alliance said that their plane was at a safe distance, and their “actions were routine.”

By the way, we’re not freaking out about it. Realizing that we are in international waters, did not cross the airspace of Lithuania. They (F-16) came out, accompanied by the identification carried out, because at this time we do they were not notified.Vladimir Popov

Popov says that the sanctions in 2014, we had a good relationship with the system of EUROCONTROL and, consequently, with NATO air defense units. “Managers well, worked ahead of the curve. We were notified, we confirmed that Yes, we are seeing, and you do not violate state borders,” he says.

So did the military. “If we were going out to the Baltic sea, we have air defence said that we have a group there-or in these days we will work around the clock pointed out. And they in most cases knew about our flight. And it gave them the opportunity to save, not to include once again dozens of expensive radar and not attract a large number of people,” says the General. Thus, it was humanitarian harmonized harmony and comprehensive security: we are not threatening anyone, we are open for communication today. But such links were discontinued and not on our initiative.

In November 2017, the crew of the su-30CM was intercepted over the Black sea P-8 Poseidon. The maneuver was performed only after an American reconnaissance aircraft approached the state border of the Russian Federation at a distance of about 10 km, said the Ministry of defense of Russia.

Misunderstanding often arises when the Baltic or in the Black sea appear to US planes. Popov stressed that initially there must be compliance with the norms and rules of international airspace that are regulated by the documents of ICAO (international civil aviation organization), in other UN conventions. They are for all countries of the world fundamental, although they may be of a recommendatory nature.

There, in NATO countries, international rules in the matter of crossing the state border are more loyal to neighboring States and not to third parties, which in this region is Russia. “They (NATO and USA) planted all the appearance of the “Russian bear” and they do it shamelessly, — says the expert. — According to the documents they themselves know perfectly well that none of the States that have ever said about our alleged violations are not formally or in the Hague court file or in another international organization, where would it be recognized as such — the real violations”.