MOSCOW, may 11 — RIA Novosti. Biologists have found significant differences in how brain cells respond to the molecules of opioid drugs on the one hand and happiness hormones — on the other, which may explain why the first cause dependence and the other is not, according to a paper published in the journal Neuron. “So far we have not had any hints that opiates act on the brain differently than endorphins. Therefore, it was extremely difficult to understand why addicts always say that heroin and other drugs cause a much greater pleasure than anything else in life. Those differences that we found can explain it,” said mark von Zastrow (Mark von Zastrow) from the University of California in San Francisco (USA). 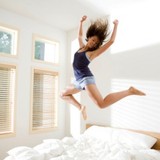 Morphine, heroin and other opiates similar in structure to the molecules of endorphins — natural hormones that play a key role in the “pleasure center” in the human brain.

When opiates enter the body, they interact with the same neurons, and endorphins, causing a powerful rush of pleasure.

It tells the background Zastrow, all this prevented the drug to create a vaccine against heroin, “natravlyayut” immunity molecule drug, or a drug that would block its effects on the neurons. In fact, all modern drugs to “pump out” drug users, block all opioid receptors, which gives many unpleasant side effects.

Similar structure and action of drug molecules and endorphins, according to the scientist, generates a natural question — why do endorphins do not cause addiction and withdrawal symptoms as heroin, fentanyl and other opiates?

Background Zastrow and his colleagues found the answer to this question, creating a luminous protein molecule — a kind of biosensor, which helped to observe what happens in the nerve cell after it will absorb a molecule of opiates or endorphins.

This molecule, as explained by the psychiatrist, was joined by only to on opioid receptors that allows you to track how varied the work of the cell and what proteins were involved in response to the signal.

It turned out that the endorphins and opioids cause in the cell a completely different reaction, although with receptors on the surface they interact about the same.

In particular, opiates affect the Golgi apparatus, the main “protein factory” of the cell, while endorphins do not.

Interestingly, the Golgi apparatus responds to drugs almost immediately, after 10-20 seconds after injection, while the endorphins go to the peak of the work in a few minutes. The instantaneous nature of the action has long been considered a characteristic feature of all opiates, is associated with the formation of dependence.