At the St. Petersburg forum for the first time in 2014 will make us official

U.S. Ambassador to Russia John huntsman said on Twitter the American diplomatic mission that will take part in St. Petersburg international economic forum (SPIEF), which will be held in late may. 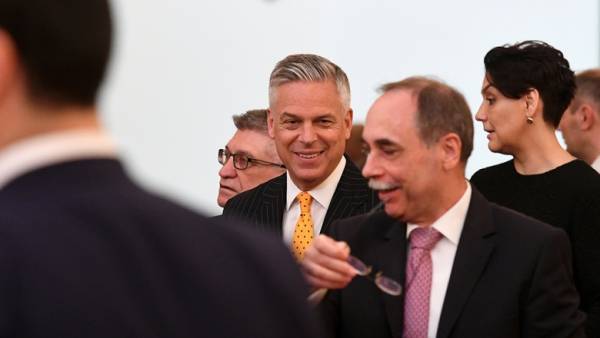 According to Huntsman, in the work of the forum will be attended by many business representatives from the United States, and this is a great opportunity to discuss the future of economic relations between the two countries.

The huntsman stated as one of the speakers at the traditional session of the “Russia — USA”, it follows from the preliminary programme. Except for Huntsman in the discussion of Russian-American relations will be attended by the Chairman of the Board of Directors of “Renova” Viktor Vekselberg, senior Vice-President “Norilsk Nickel” and “Interros” Andrey Bugrov, the President of IBS Group Anatoly Karachinsky, President of RSPP Alexander Shokhin, President of Boeing International Bertrand-Marc Allen, President of PwC Bob Moritz, head of Citi (in Russia, Ukraine, Kazakhstan, Turkey, Poland and Israel) Marc luet and other representatives of the American and Russian business. The moderators of the session will be the head of the American chamber of Commerce in Moscow Alexei Rodzyanko, President of “Orion Heritage” David Yakobashvili.

The American official for the first time since 2013, will speak at the St. Petersburg forum, to the archive of programs forum. After the annexation of Crimea, the US government in 2014-2016 sent delegations to St. Petersburg and called on American business to refuse to participate in the forum.

Now, the U.S. government changed the tone, and ceased to impede the participation of American business in St. Petersburg the forum, said in an interview with Bloomberg Rodzianko.

Predecessor Huntsman John Tefft attended the SPIEF-2017, however, not performed. The last time the us official spoke at the St Petersburg forum in 2013, it was the under Secretary of Commerce Francisco Sanchez.

St. Petersburg international economic forum for the high level of participants compared to the Davos forum. This year SPIEF will be held from 24 to 26 may. The forum will be the President of Russia Vladimir Putin, his French counterpart Emmanuel macron and Prime Minister of Japan Shinzo Abe.

#Pocahantas : “I am very interested in the questions that I get in social networks. What would you like to ask me this time?”
Ask your questions with the hashtag #AskTheAmbassador ! pic.twitter.com/8ffE2rEo8A