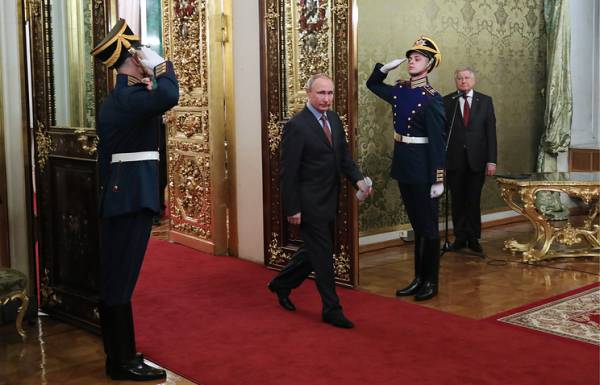 MOSCOW, may 7. /TASS/. The Russian government, according to article 116 of the Constitution, on Monday to resign in connection with the expiration of the six-year mandate of the President. Remained in the status of “acting”, the members of the Cabinet will wait for the formation of the new composition of the main Executive body of the country.

After the ceremony of inauguration of the President, which will take place at noon Moscow time, Putin will have to decide on the candidacy of the Prime Minister and to direct corresponding representation to the state Duma. After approval by the lower house of Parliament, the Prime Minister of his candidacy within a week will present to the President proposals on the structure of the Cabinet, and the personalities of his deputies and Federal Ministers. With their approval, will start work the new government of the Russian Federation.

Late last night, Putin brought the Cabinet in the Kremlin. He thanked everyone who took part in the work in such difficult conditions, and gave a high assessment of the government. The President also noted the great contribution to the successful implementation of the tasks of Prime Minister Dmitry Medvedev.

The Cabinet six years of aging

The outgoing Medvedev’s Cabinet was formed from 8 to 21 may 2012 and became the most “long-playing” by the government, spent a full six-year presidential term. However, neither the Cabinet nor its structure was not permanent and the conditions in which I had to work, can not be called quiet. For six years the government had to go through many dramatic moments associated with the emergence and abolition of ministries, the redistribution of powers, corruption scandals and other events. As a result, to resign on Monday won’t be the same team that took them in 2012.

The body of the Vice

When Putin was involved in the formation of the Cabinet of Ministers in 2012, he very seriously approached the issue of updating of personnel. As noted, in the then new government “three quarters of new people”. Originally the Cabinet consisted of seven Deputy Prime Ministers (one of which is first) as well as 20 Ministers. But over time the number of Deputy Medvedev has increased by two Ministers also began on two more.

Case of Vice-premiers in 2012 has changed: new jobs, the government moved, for example, Viktor Zubkov and Igor Sechin. In their place came fresh footage. Of the assistants to the President, the Vice-premiers moved Arkady Dvorkovich, the Deputy Prime Minister was reappointed as visitor of the government six months before Dmitry Rogozin, a new face among the deputies Chairman of the government is Olga Golodets, who took over the supervision of the social sphere.

The first “loss” Vice-Premier composition suffered a year later. 7 may 2013 with the formulation “at own will” the government’s left Vladislav Surkov, however, this was preceded by his polemic with the head of state. The President and the Vice-Premier went to the assessments of the quality of the execution of presidential instructions. The place took Surkov, Sergei Prikhodko, to which was transferred the functions of the head of the government apparatus.

31 Aug 2013 to work on Krasnopresnenskaya embankment after a brief pause came back Yuri Trutnev, who in the Putin’s government was Minister of natural resources and environment, and then little more than a year served as assistant to the President. The post of Deputy Prime Minister he combined with the work of the Plenipotentiary representative of the President in far East Federal district.

More significant changes occurred in the Ministerial body. Here in may 2012 there were 15 new heads of departments, though there are quite a number of “veterans”.

Posts maintained by the Minister of foreign Affairs Sergey Lavrov, defense Minister Anatoly Serdyukov (who has worked in this capacity for only another six months), the Ministers of justice Alexander Konovalov, Finance Anton Siluanov, sports Vitaly Mutko, and also at that time acting Minister of industry and trade Denis Manturov, who a few months earlier, took this position after leaving the Board of the Eurasian economic Commission Viktor Khristenko.

However, the new appointees were more. For example, the youngest at that time a member of the government became the new head of the Ministry Nikolai Nikiforov, who at the time of the appointment was only 30 years old. Former presidential adviser Mikhail Abyzov received a Ministerial portfolio with a completely new “content” – for relations with “Open government.” Instead, the Ministry of internal Affairs Rashid Nurgaliev was headed by Vladimir Kolokoltsev, who was the head of the Main Department of the MIA of Russia in Moscow.

Initially, the government of Medvedev was not one of the most popular and experienced Russian politicians Sergei Shoigu. A few days before the new government the former head of the Ministry of emergency situations head of the Moscow region. His place was taken by Vladimir Puchkov.

However, six months later, Shoigu was waiting for the return to the Cabinet. General of the army tried on the uniform of the Minister of defense, succeeding Serdyukov, who was fired amid scandals surrounding the management of the property of the defense Department.

Short life was prepared and the Ministry for Crimean Affairs, which appeared on 31 March 2014, after the Peninsula reunited with Russia, and lasted until 15 July 2015. All this time the office was headed by Oleg Saveliev. The reason for the abolition was the end of the transition period, and the appropriate authority went to the Ministry of economic development.

The first two “territorial” authority appeared in may 2012. They began a Ministry for North Caucasus Affairs and the Ministry for development of Russian Far East. And the last for the first year of its existence, has undergone a change of management, when Viktor Ishayev was replaced by a young entrepreneur Alexander Galushka.