May 2 is world tuna day

May 2 — not only moved from winter break day off, but a veritable feast. On this date in the world recently celebrating the day of the tuna. About why this fauna has received his holiday, how to celebrate this day and any other holidays in honor of fish exist in the world — read in the material “Газеты.Ru”. 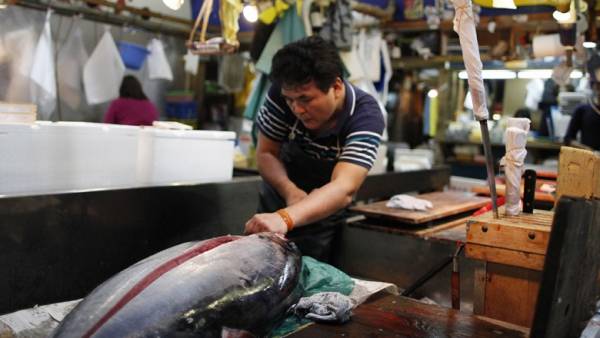 Tuna is one of the most famous and popular fish that is eaten. Its even on a par with salmon called sea chicken, compared with chicken meat as the most popular among other birds.

On average an adult tuna weighing 60-70 kg and reaches 1.5−2 meters in length. The largest specimen among was was caught in Japan: the fish weighed 684 kg, and its length was 4.6 meters. And in January 2013 in Japan caught a tuna weighing 222 kg. sold It at auction for a record $ 1 million 760 thousand dollars.

When tuna and not perceived as a fish. The color of its meat is not as pale as most fish, and bright red, like beef.

The reason for this unusual color is myoglobin, a substance that is produced in the muscle of tuna to a fish’s organism was resistant to high loads.

Tuna moves a lot and very fast: its speed reaches 80 km/h. However, tuna is popular not for their sporting achievements.

In the first place, it meat is rich in protein: tuna it contains up to 30%. Moreover, it contains vitamins (especially vitamin D), calcium, phosphorus, and polyunsaturated fatty acids omega-3 and omega-6, and all this at a relatively low caloric content.

Worldwide tuna is so loved that its population began to decline rapidly. Though the share of migratory tuna species account for 20% of the value of all marine fisheries, from the beginning of his Providence in the mid-twentieth century the population of tuna has decreased by 4%.

As for the largest Pacific tuna for the past 40 years its population in the Eastern Atlantic has been reduced by 72%, and in the West by 82%. Today fishing of this fish is engaged in more than 80 countries.

As a result, in December 2016, the UN General Assembly adopted a resolution and declared may 2 world Day of tuna. Note it is recommended in accordance with national priorities, increasing awareness of the value of tuna, threats to its population, economic and social aspects of tuna resources, and to talk about best practices in this area.

And naturally, this day should refrain from dishes of tuna.

This is not the first and hardly the last feast in honor of the fish, which is celebrated in the world. In some countries there are national holidays with a similar theme, but note they are exactly opposite.

The locals call this holiday Kingo Matsuri. Daily on the shelves of markets in Japan and so the mountain stretches, fresh fish, and on may 2 it can be found on every corner. Raw fish is eaten by the ton in the form of tartare, crudo, ceviche and sashimi, and also in the more usual rolls and sushi.

Also it is marinated, fried in a pan and on an open fire, boiled in soy sauce or boiling oil, and even make sausages. Even the locals love dried fish: the familiar tuna fish, dried, smoked and then grated into chips, can be stored for a long time and is an expensive gift.

Especially cherished the Japanese refer to the selection of sauces for the dish and its appearance: on the plates is sometimes served real works of art.

Also on this day, there are workshops on how to choose the right, clean off the scales and cut up raw fish.

Day of the herring, the Netherlands

One June Saturday in one of the Dutch ports comes first during the season, the trawler with a fresh herring. This catch is considered to be the most successful, as the fish reaches its ideal size and degree of fat. You can often hear the locals call the holiday the “Day of flags”, as the herring sold with stuck wooden sticks, with country flag on the end so as not to dirty his hands with the fish.

The ship first came into the harbour with their catch, gets a cash prize — this happens usually in the beginning of the week.

The herring is immediately salted and Saturday according to tradition, the first barrel is sent as a gift to the Royal Palace, and the second goes under the hammer at auction.

All proceeds from the sale of the second barrel go to charity, and the remaining herring at odds of market stalls. The sellers in their national costumes directly behind the counter deftly cut up herring and serve it with onions and pickles in a bun.

Also in honor of the holiday specifically for tourists are the tours around the Harbor, filled the courts of modern and ancient sailboats, and next to the pier in the port of Scheveningen are equestrian events.

Every year more and more Americans celebrate the Day salmon. Not in all States, however — is that at the beginning of October, this holiday is celebrated mainly in California, Illinois and Oregon. He is part of a healthy diet in America, as salmon as well as tuna, are rich in lots of vitamins, micro and macro, and also contains fatty acids omega-3.

The day of the feast are a variety of games for children and adults, associated mainly with traditions of the indigenous peoples of North America. Festival participants dressed in the national native American costumes, visitors can weave baubles, wreaths and dream catchers. The terms are set decorations in the form of fish, and of course, tents and trailers with a variety of dishes from salmon.