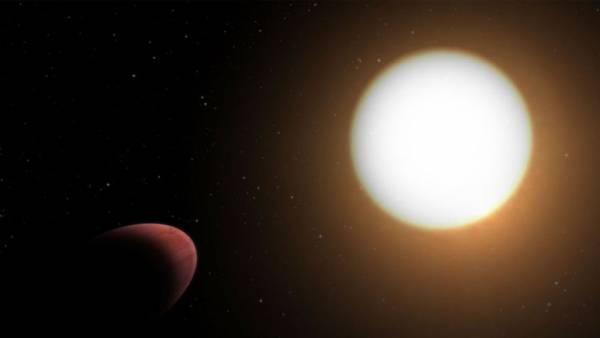 The found planet – “hot Jupiter” WASP-103b – looks more like a rugby ball than a regular ball. This is the first time that tidal deformation has been detected directly from the transit light curve of an exoplanet.

Astronomers have discovered up to 170 exoplanets the size of Jupiter

The planet is located at a distance of over 1000 light-years from Earth in the constellation Hercules, it is almost twice the size of Jupiter, and its mass is 1.5 times that of Jupiter. Its unusual appearance is caused by tidal deformation, a group of European researchers led by Susana Barros from the Portuguese Institute of Astrophysics and Space Research reported in an article in the journal Astronomy and Astrophysics.

According to a new study, the shape of WASP-103b is due to the fact that the planet is stretched by the gravitational forces of the parent star. The exoplanet WASP-103b itself was discovered back in 2014, it is considered a “hot Jupiter” because it orbits its parent star in just one Earth day and is exposed to intense stellar radiation and strong gravity. The tidal forces experienced by the planet are similar to those caused by the Moon in the earth’s oceans, but all this happens in a much more extreme form.

The parent star WASP-103 is slightly larger in size and mass than the Sun: its mass is 1.22 solar, and its diameter is 1.43 of the diameter of the Sun. At the same time, the star is slightly younger than the Sun, its age is 4 ± 1 billion years.