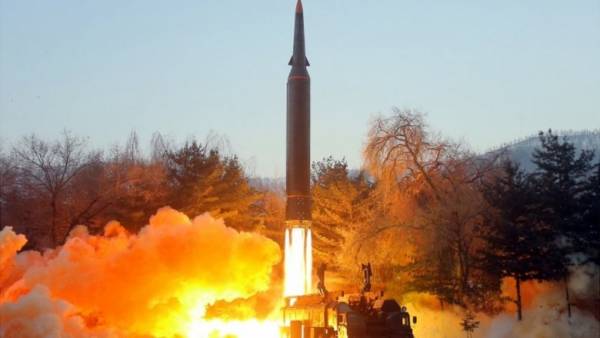 This is & nbsp; the second test of a hypersonic missile announced by Pyongyang, which after launch can remain unnoticed for a longer time than a conventional ballistic missile air defense.

North Korean leader Kim Jong-un said in his New Year speech that North Korea will continue to build up its defensive power, which, he said, is required by the unstable military situation on the Korean Peninsula.

Pyongyang is now trying to enter a & nbsp; small circle of states, such as the United States and & nbsp; China. which have hypersonic weapons.

The current launch of a hypersonic missile was recorded by the Japanese coast guard early in the morning on & nbsp; and & nbsp; a little later, these messages were confirmed by the South Korean defense department.

During the & nbsp; test in the & nbsp; environment a hypersonic gliding warhead separated from & nbsp; its launch vehicle and & nbsp; made a maneuver, deviating & nbsp; 120 & nbsp; km to the side, before hitting a target & nbsp; 700 & nbsp; km away, according to KCNA.

According to the agency, the tests confirmed the effectiveness of the missile control, and & nbsp; also the possibility of its launches in winter. A hypersonic missile typically flies to & nbsp; targets at & nbsp; lower altitudes than ballistic missiles, and & nbsp; can reach speeds of more than & nbsp; & nbsp; five times the speed of sound, or about & nbsp; 6200 & nbsp; km/nbsp; hour.

> Missile tests in & nbsp; North Korea are taking place at & nbsp; that & nbsp; time when the country's authorities are experiencing enormous difficulties in & nbsp; supplying the population with food. Most of the population is starving. The situation is aggravated by quarantine measures caused by the coronavirus pandemic.