The talks between Putin and Lukashenko lasted 3.5 hours

Russian President Vladimir Putin and his Belarusian counterpart Alexander Lukashenko held on Saturday the Kremlin talks, which lasted about 3.5 hours, reports TASS. During the meeting, the leaders discussed further development of relations between the two countries. The previous meeting took place on December 25. 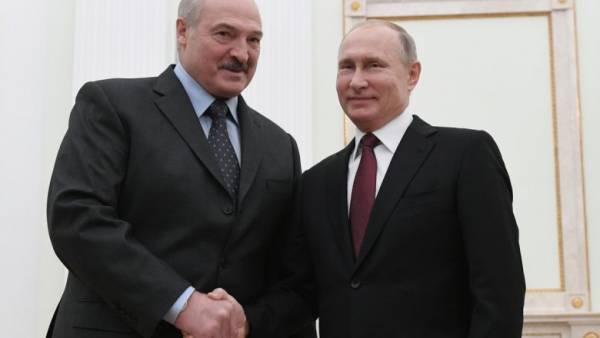 Press Secretary Mr. Lukashenko Natalia Eismont said broadcast show on TV channel “Belarus 1” that the President of Belarus at the meeting, gave his Russian counterpart for the New year fat and four bags of potatoes. “I can say that not only potatoes gave Alexander Lukashenko, Vladimir Putin, in fact, as far as I know, the President of Russia loves a good sale” she said on the air. According to her, Mr. Lukashenko knows about the preferences of their colleagues, so “in the previous visit and brought the fat, the most delicious, of course, chosen by the Belarusian fat”.

In addition, during the talks Mr Putin invited the President of Belarus to play with him in a hockey match Night hockey League, but he refused, citing a large number of cases in Minsk. The Russian leader added that they all agreed to meet soon, to play with hockey and skiing.

Earlier, the press Secretary of the President Dmitry Peskov reported that following the talks, Vladimir Putin and Alexander Lukashenko, the press conference was not planned.

Today, December 29, Russia’s President received the head of the Belarusian state. During the meeting, Mr. Lukashenka noted the need for further work on the solution of problematic issues on the agenda of the two countries. “I made a joke that bothered each other. Probably will get bored fail, because there are issues that need to be discussed,” he said.

The President of Belarus said that after the meeting of 25 December, the parties worked on issues related to the created bilateral working groups and the topics that you need to consider that they were not an obstacle to integration. “We are such a group in the same way as you have formed,” — said Alexander Lukashenko.

As we agreed, we create a working group for the further development of our relations in the economic sphere, other areas and on your suggestion, we will work towards the development of our plans for the construction of the Union state.Mr Putinprime Russia

About the previous meeting between the two leaders read in the article “Kommersant” “Here Russian spirit, here smells of Belarus”.