The volcano Anak-Krakatau after the eruption has decreased four times

The eruption caused a tsunami that killed more than 420 people. 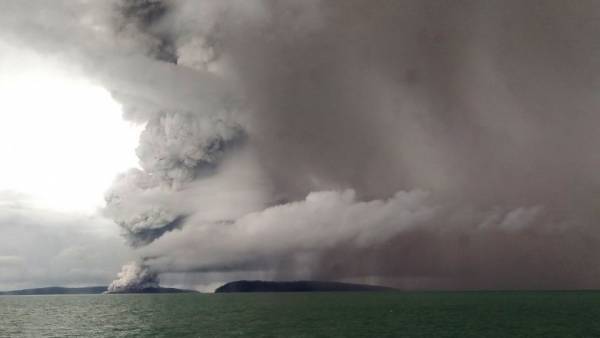 Indonesian volcano Anak-Krakatau, whose eruption a week ago caused a massive tsunami, fell four times in volume and lost two-thirds of the height, according to the Associated Press referring to the Indonesian scholars.

The eruption and destruction of the volcano, whose name translates as “child of Krakatau” (as it appeared after the eruption of Krakatoa in 1883), 22 Dec local time led to a tsunami: waves up to five meters killed more than 420 people, 40 thousand people were forced to evacuate.

The maximum height of the crater has decreased from 338 meters in September of this year to 110 meters as of Friday.

While access to the volcano are difficult because of ongoing seismic activity and rough seas, so their findings are made on the basis of analysis of satellite images of the volcano obtained from European vehicles. They point out that reducing the weight of the volcano will affect the resulting tsunami — if the eruption continues, the resulting wave will be weaker.

This spring, British scientists studied changes in topography of the seabed near the underwater volcano, Kick-em-Jenny in the Caribbean sea over the last 32 years, determined the periodicity of volcano activity and said method of seismographic analysis of the eruptions. In addition, scientists were able to map the surface of the volcano, when a plume of ash and gas from the crater still continued.