Physicists have created on the basis of string theory a new cosmological model that explains the accelerated expansion of the universe. 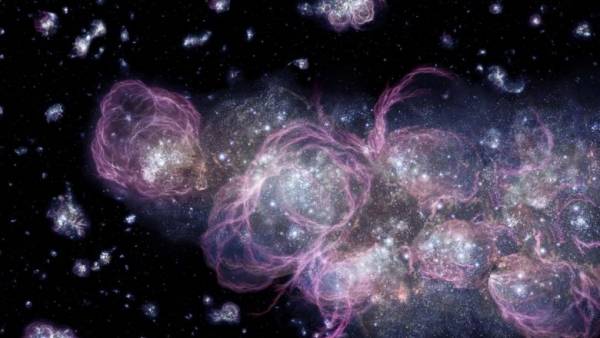 According to it our universe is embedded in higher-dimensional space, and all particles — in fact, the ends of the strings, which extend into an extra dimension. The results published in the journal Physical Review Letters.

In the last 20 years, astronomers have shown that our universe is expanding with acceleration. This physical phenomenon, the researchers explained the existence of dark energy. However, the existence of dark energy to explain so far failed. Although in the General theory of relativity there is only one solution to this puzzle, theorists have proposed a variety of models based on other concepts.

In particular, it was proposed cosmological models based on string theory. According to this idea, all particles can be described as different oscillation modes of a kind of one-dimensional strings. However, for string theory requires the existence of extra dimensions in addition to the known three spatial and one time.

Most often it is believed that all these spaces compactification — folded to very small size — but some can be longer in distance, however, remaining inaccessible for direct study.

Over the past 15 years was invited to a lot of string cosmological models, but these have been criticized by the scientific community.

of an Unexpected opening in the constellation Taurus: how planets are born

In the new work, the staff of the Uppsala University (Sweden) offer their own string model, which can explain the dark energy. According to their idea, our universe is the boundary of the expanding bubble in space with greater dimension. In the framework of this model it turns out that all particles are manifestations of strings, fixed end in our space, but are located in an.

The researchers also showed that the existence of such extending of the bubble into the framework of string theory, which also does not exclude the presence of other such bubbles. The authors call their model is not only a new view of the universe, but also the potential to test the earlier theory.