Putin and Lukashenko will hold talks in the Kremlin

MOSCOW, 29 Dec — RIA Novosti. The presidents of Russia and Belarus Vladimir Putin and Alexander Lukashenko will hold talks in the Kremlin on Saturday to continue the dialogue on topical issues of Belarusian-Russian cooperation. 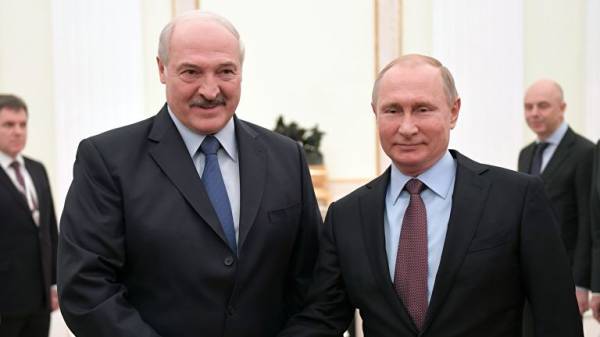 The two leaders spoke last time on 25 December. As reported, they discussed, including energy prices and future changes in the Russian tax legislation. Press Secretary of the Belarusian President Natalia Eismont reported that the parties managed to reconcile positions on all issues. As the press-Secretary of President Dmitry Peskov said that the parties did not succeed to bring closer the positions on the oil tax maneuver, these, including, will set up a working group to resolve the problematic issues between Moscow and Minsk.

This time, as told the press Secretary of the Russian leader, Putin and Lukashenko will discuss the topic of the tax maneuver and the Treaty of the Union state in 1999.

In Russia in the years 2019-2024 of the planned completion of the so-called tax maneuver, which involved a gradual zeroing of export duties on oil and increase tax rates. Additional costs in Belarus arise from the expected increase in oil prices from Russia and reduction of export duties on oil products. Minsk has estimated its losses over the entire period of implementation of the maneuver up to $ 11 billion, and the losses of the budget in 2019 is approximately $ 300 million.

Another issue is the price of gas for Belarus. During the meeting of the Supreme Eurasian Council (SEEC), which was held in St. Petersburg on 6 December, Lukashenko publicly expressed dissatisfaction with the high cost of transporting Russian gas to the country. According to him, the price is about three times higher than the rate of “Gazprom” in the domestic supply.

As a result, according to Lukashenka, the price of gas for Belarus at the border with Smolensk region amounts to almost 130 dollars, while the wholesale price for Smolensk consumers — $ 70.

Putin in turn said that the Russian gas price for Belarus has a relatively low thanks to the Eurasian economic Union, a further reduction takes time and requires a different level of integration. The Russian President reminded about the plans to create by 2025, a single market for gas, oil and petroleum products Eurasian economic Union. He also offered his Belarusian counterpart later without the media to continue the discussion on this topic.

Who has to decide

The meeting of Putin and Lukashenka on 25 December in the Kremlin was the decision to establish a working group to resolve the problematic issues between Moscow and Minsk. From the Russian side the group was headed by the head of economic development Ministry Maxim Oreshkin.

According to Peskov, there are many issues that need to be discussed, and most importantly, that “very many questions can be discussed only at the highest level, and only higher level can be lowered orientation in which direction to work of this working group.”