Syrian troops occupied the stronghold of the Kurds

Syrian armed forces entered the city of Manbij in the North of the country, after replying to the request of the Kurds to protect them from Turkey. This is stated in the statement of the General staff, reports Reuters. 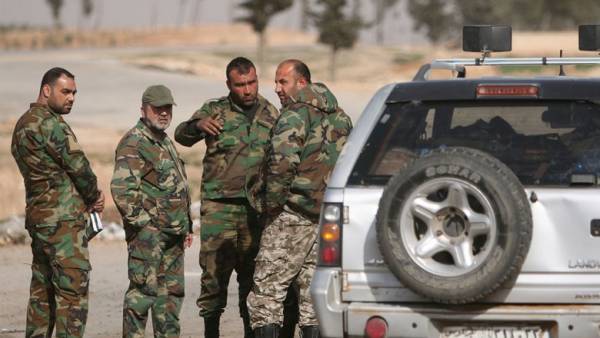 The military raised over the settlement of the Syrian flag. Reportedly, the government army “guarantees full security to all the citizens of Syria and other residents” Manuja, located about 25 kilometers from the border with Turkey.

The statement urged Syrians “to join forces for the sake of preserving national sovereignty”. The military also set up to destroy any invaders.

Earlier, the armed Kurdish “people’s protection Units” (YPG) has asked government troops to occupy the city and protect it from the threat of the Turkish invasion.

25 December it was reported that the Syrian military appeared near Manuja. In a region controlled by Kurds, arrived 40 pickup trucks, two tank trucks of supplies and armored vehicles.

Turkey this week began to pull tanks and armored personnel carriers to the border with Syria. In Ankara pointed out that want to start operation against terrorists in Syrian territory East of the Euphrates river as soon as possible. To the militants, the Turkish side considers representatives of the Kurdish party Democratic Union (PYD) and its armed “people’s protection Units” (YPG).

The Kurds have traditionally supported the United States in mid-December announced the withdrawal of its troops. At the beginning of the year, Turkey carried out an operation “Olive branch” against the forces of the Kurds in Afrin.