Wind wall, the dog “fly”. What’s it like to live in the Arctic circle

Root norilchanin Yuri Loginov — on how to live in the harsh polar hipsters, the dangers of “black blizzards”, “flying dogs” and exciting trips in a jeep in bad weather. 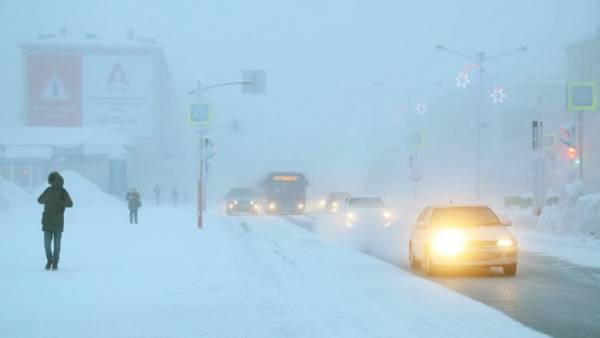 The strongest storms, knocking down the wind and low temperature — Norilsk residents know what the weather. Stories about freezing to -15 °C the Muscovites amuse them, in fact — 15 °C for norilchanina — it’s not even the excuse to wear winter boots. What can we say about our “strong winds” compared to their “black Blizzard.”

Yuri Loginov — root norilchanin. For their 33 years old young man was a witness of the different vagaries of weather. About how he lives his hometown during “black blizzards” when the wind speed exceeds 40 m/s, he told Aify.

“Black Blizzard” is always held in Norilsk in a big way: the wind blows from the feet, and the visibility is much worse. They say that if you pull the hand, will not be visible fingertips. But I think Norilsk bit of an exaggeration. Usually the visibility in the city is limited to 3-4 meters. Although I heard the story about the driver who got out of the car in a severe snowstorm and was unable to return. When the street was quiet, he was found dead literally in 10 metres from the car. But do not claim that this is a real case, not an urban legend. But the wind in this storm is really powerful — 30 m/s and above.

Sometimes it’s like he’s pushing you in the back and makes the run, sometimes there is a wall, and you seem to be moving fast, but budge can not.

Because of commercials on the Internet many people think that in the snowstorm we move on all fours. Honestly, in my life, I never seen anything like it and he never did.

Many people know the joke that Norilsk is a city in which the property is to fly. And, like in any joke there is some truth to it. But only a fraction. Of course, the wind will not catch you as a piece of paper, he can just carry a few metres, or to tumble down into the snow. Even me sometimes blows, to say nothing of women and children.

As strange as it may sound, but the greatest danger during “black blizzards”, and just in strong winds — roofing sheets, which sometimes rips off roofs, and other loose structural elements, plus advertising banners, construction waste, etc.

There were times when the people they killed. Me too, once flew roofing sheet, unpleasant feeling, I tell you. So in bad weather often have to look around.

I calmly refer to the Blizzard, if you want to go somewhere, sit at home and wait until everything calms down, just will not. For such special occasions, I got some ski goggles and a neck tube. You just have to roll up properly, and you can go on the street. By the way, my wife and I also bought a set of “exit”. So to work she comes with perfect makeup, under the glasses the ink is not blurred. Don’t understand why more don’t use this cool life hack. Apparently, frostbitten face like Norilsk. With glasses I can easily walk in any weather, “visored” and watch as you fly past the dogs. About dogs of course, I’m exaggerating, although it seems to me that if this weather to bring a Yorkshire Terrier, he will hang on the leash like a kite.

Much to warm in a Blizzard does not make sense because the temperature is usually not very low. I wear a jacket, sweater, jeans, and simple boots boots. At the bus stop in them, of course, does not stand up, and while we move, very comfortable. The main thing that the shoes were high-and during a Blizzard the snow drifts grow quickly.

Bad weather for some of Norilsk’s not a reason to forget about fashion. During my student days at the peak of popularity was the cap-l’oeil, even if you wore the hat, unroll the ears of her during a Blizzard and no one had not occurred. It is better to go with frostbitten ears, but “style”. Now students another feature — they tuck pants. And in the snow and in a Blizzard, in the cold, harsh polar hipsters don’t give up. And in vain, in Norilsk such things can be dangerous.