Ukrainian Orthodox Church has appealed to the constitutional court

UOC challenges the law requiring her to mention Russia in his name. 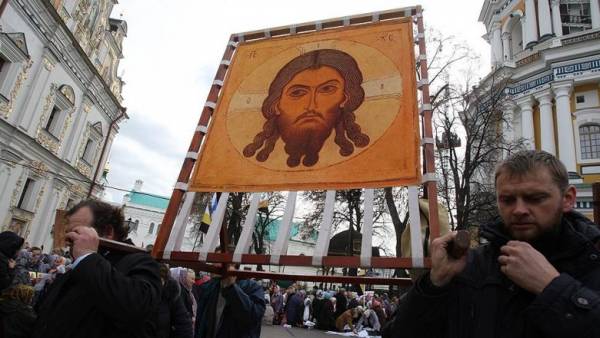 The Ukrainian Orthodox Church (Moscow Patriarchate) will appeal against in the constitutional court of Ukraine recently adopted by the Verkhovna Rada a law requiring it to include in its name the mention of the ROC. According to the UOC, the authorities ‘ attempts to forcibly change its name violate the right to freedom of religion and diskriminerad millions of its parishioners.

As said “Kommersant” in the Kyivan Metropolitanate, in accordance with the Charter of the Church is called the Ukrainian Orthodox (UOC) even without the prefix of MP (Moscow Patriarchate). All attempts of the present authorities of the country to deprive the Church of this name are illegal. “Approved December 20, bill No. 5309, forcing the Church to change the name violates the right to freedom of religion and discriminary religion millions of believers of Ukraine and Constitution of Ukraine, the universal Declaration of human rights and the Convention on the protection of human rights and fundamental freedoms”, — stated in the informational and educational Department of the UOC.

It recalled that “Ukraine is a secular state, and forced the UOC to change the name is not than other, as intervention in its activities, which can lead to unpredictable consequences in society.”

According to UOC-MP representatives, to rename the Church in the Russian trying created in favor of the so-called unification Council of the Orthodox Church of Ukraine (PCU), which expects to receive in January 2019, the Tomos of autocephaly of Constantinople, Patriarch Bartholomew. The new Church intends to entice a flock of the Ukrainian Orthodox Church, confuse the people, according to the Ukrainian Orthodox Church. The UOC does not intend to implement the decision of the secular authorities, and would “defend their rights by all legitimate means.” “We sent an appeal to President of Ukraine with a request to veto the law, but he didn’t hear us. Now we are initiating an appeal to the constitutional court”, — said the head of the legal Department of the UOC Archpriest Oleksandr bakhov.

22 December the President of Ukraine Petro Poroshenko has signed a law obliging the Ukrainian Orthodox Church to enter in your name belonging to the Russian Orthodox Church. This act, the Verkhovna Rada adopted on 20 December by the votes of 240 deputies. In the process of approval of this document, the initiators got into a fight with opponents of the renaming of the Church the opposition Yuriy Boyko and Nestor Shufrych.

The MP said that “the forcible renaming of the UOC — the agony of power, surviving the last months.”

“Such gross interference of government in matters of religion I have not seen and did not expect — said Mr. Shufrych.— Today to force people to call the Church as it would be desirable to separate the handful of MPs with rating in the area of statistical error, is criminal and irresponsible.”

Supporters of the President of Ukraine is happy with what happened. According to the interlocutor of “Kommersant” in the Ukrainian presidential administration, “Ukraine finally call a spade a spade, the Russian Church will designate it in your name, and the believers will be defined, with whom they go.”