Kiriyenko: the condition of reaching the final “Leaders of Russia” will be the implementation of a social project

MOSCOW, December 24. /TASS/. The participants of the contest for young managers “Leaders of Russia” to reach the final will have to come up with and implement in their region socially significant project. This was announced on Monday by the first Deputy head of the presidential administration of the Russian Federation Sergey Kirienko. 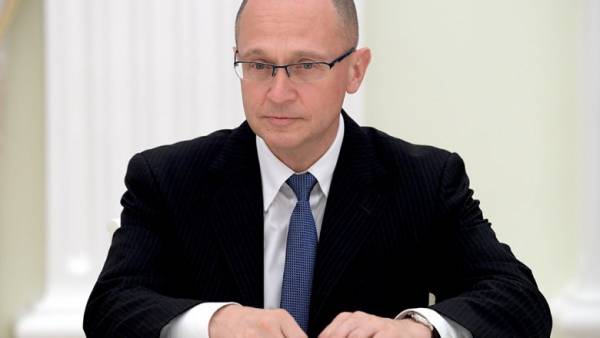 “The condition of pass in the final will be a requirement that each of the semifinalists will have to choose and implement some kind of socially meaningful action on the territory of the region”, — he said at a briefing.

Kiriyenko stressed that the participants of the contest give the finished cases, they must choose a social problem in the region that needs to be solved, and to figure out how to do it.

In the semi-finals of the competition were about 3.3 thousand people in the final will be 300.

“It is impossible to pay off the money.”

Kiriyenko outlined the principal condition of the contest of social projects: “it is impossible to pay off the money.” “We are holding a contest on who has more money who do not mind to spend it. Although, if needed, including money to involve to solve the problem, great, but it is not measured by the size of the money,” he explained, stressing that “just charity doesn’t count”.

Another condition is the organization of the team. “This may not be the action that makes one person should be able to generate some kind of command for this project” — said Kiriyenko.