MOSCOW, 24 Dec — RIA Novosti. Observing the glow of the void between galaxies in large clusters of “star cities” helped space Observatory “Hubble” for the first time to see the “shadow” of dark matter. Her photographs have been published in the journal MNRAS. 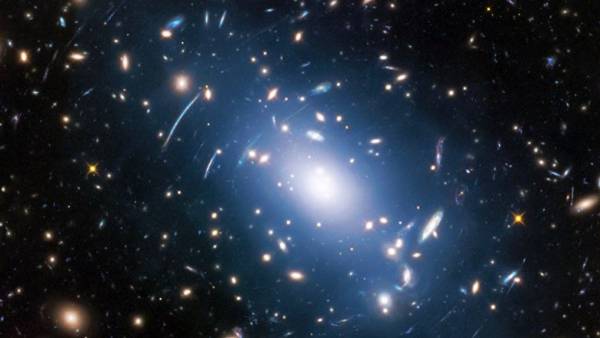 “We figured out how you can actually “see” dark matter. It turned out that very dim light that is present in the void between galaxies in their large clusters, it contains a map of the distribution of this substance,” says Mireya Monte (Carmen Montes) from the University of New South Wales in Sydney (Australia).

Quite a long time, scientists believed that the universe consists of the matter that we see. It is the basis of all-stars, black holes, nebulae, clusters, dust and planets. But the first observations of the speed of movement of stars in neighboring galaxies showed that the lights on their edges move them to an impossibly high speed. It is about 10 times higher than shown by the calculations on the basis of mass of all bodies in them.

The reason for this, as scientists believe today, was the so-called dark matter — the mysterious substance, whose share accounts for approximately 75% of the mass of the Universe. Usually, each galaxy is about 8-10 times more dark matter than visible “cousin”. She holds the stars in place and not allow them to “scatter”.

Today, almost all scientists believe in the existence of dark matter, but its properties other than its apparent gravitational effect on galaxies and clusters of galaxies remain a mystery and subject of debate among astrophysicists and cosmologists.