Sergey Lavrov: Russia’s war and the USA would be a disaster for humanity

In 2018 Russia’s relations with Western countries on the background of numerous scandals and sanctions went into a deep disadvantage. In anticipation of the new 2019 Russian foreign Minister Sergei Lavrov said in an interview with RIA Novosti about whether to wait further cooling, a possible answer of Moscow to be scrapped by the Washington Treaty on the elimination of intermediate-range and shorter-range price potential conflict of Russia and the USA, as well as on presidential elections of Ukraine, the situation around North Korea and Syria. 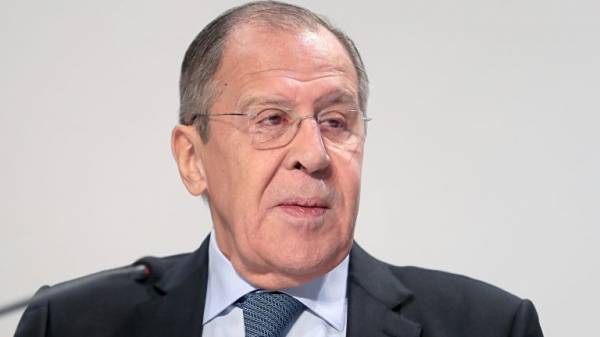 — Next year again, almost campaign in the United States. Whether to wait for the next cooling of relations? Can I hope to maintain at least modest dynamics of contacts at the highest level? Where and when they can happen given the disruption of the meeting in Argentina? Is it true that we are talking about January?

We have become accustomed to that conjunctural factors associated with American domestic politics have an impact on our bilateral relations, create additional challenges in the development of dialogue. Lately their impact is not even depends on what stage of the electoral cycle in the United States. You can, of course, expect that as you approach the next presidential election in November 2020 attempts to play the Russian card will be made to individual politicians in Washington more and more insistent. I hope that this will not lead to a further undermining of the Foundation of bilateral relations, which is not in the best condition.

Consistently advocate that to develop a normal, predictable dialogue with the US on the basis of principles of mutual consideration and respect. While progress in this direction does not work due to the hostile actions of Washington, the continuing attempts to put pressure on us by economic, military, political, and other tools. The result is stalling work on the important areas of bilateral and international agenda, including those related to the maintenance of stability and security in the world.

Speaking in a broader, even philosophical terms, the main problem in our relations is that the United States never considered them as an end in itself.

Russia American politicalmath is an object. We are demonized to keep the discipline in Europe and strengthen Euro-Atlantic link. Or, for example, are now seriously discussing how to use Russia against China in their favor. And attempts to instigate a regime change in our country or the changes in the Russian policy — and this illusion in Washington affects many — the desire to make us a tool serving the interests of the United States.

We know the countries that the Americans managed to force into such a role, but, of course, with us this will not work. And as long as the objectification of Russia, apparently, left a legacy from the cold war have not faded from the minds of the American elite and will not go away from the practice, the relationship will not change. Selective interaction is flawed. It does not consolidate the positive trends and predictable future.

We, on the other hand, with respect to any state building just valuable manner. Ready to act in the same spirit and with the United States. I repeat: the creative potential of bilateral cooperation is huge. However, it remains unrealized for many decades. I think our people deserve much better than what we have now. With regard to contacts at the highest level, President Vladimir Putin on a press-conferences at the summit “group of twenty” in Buenos Aires, said he is open to meeting with the President of the United States, when the American side is ready. It is difficult to say when and where this contact can take place.

— It, apparently, goes to the scrapping of the INF Treaty. Whether we’re negotiating with the US and the EU about any kind of guarantees that in Europe such missiles will not appear? Ready our partners to give such legally binding guarantees? If not, what will reply? Again, the missiles in Cuba?

— Convinced that the collapse of the INF Treaty is able to hit hard on international security and strategic stability. Have to warn you: we cannot and will not ignore the appearance of new American missiles that threaten us and our allies. Should be no doubt that we have the necessary tools to ensure their own safety, are also able to further strengthen its defence capabilities. However, Russia, like any other sane country, not interested in the arms race and a new missile crisis.

If the United States still have the power that can be used taken by Washington pause to find ways to save the INF Treaty, we are open to this. Urge to abandon attempts of blackmail and replication of unproven charges in favor of truly meaningful and constructive work together on the existing common concerns. Formally proposed to start it in a recent letter by Sergei Shoigu, chief of the Pentagon, repeatedly offered to begin the dialogue by RIAC and signed by the state Department. The answer is no.

At the summit in Helsinki on July 16, gave the Americans specific comprehensive proposals for the agenda of long-overdue in-depth discussion of topics of strategic stability and arms control. Unfortunately, from the US desire to negotiate with us is not visible. From the dialogue, they evade, no warranty is offered, apparently preferring to have full freedom. Overall ready to work in a variety of formats with the participation of all countries, who realize their responsibility for peace and security.

— How big is the probability of direct armed conflict between Russia and the United States, Russia and NATO? Being prepared is our country to such a development?

— I think that everything in the world is well aware of the armed conflict involving the two leading nuclear powers — Russia and USA — will have disastrous consequences for humanity. The fact that a nuclear war cannot be won and it should never be waged, no doubt.

However, we have to state that fixated on their own geopolitical ambitions of Washington and its allies are not prepared to adapt to global realities, changing is not in their favor. Hence the desire by all means to contain these processes and large than before, the aggressiveness in foreign Affairs. To escalate the confrontation, frozen dialog channels. Of particular concern are the steps for scrapping of major international agreements in the field of strategic stability. This conflict line based on power tools will inevitably lead to a further unbalancing of the global security architecture, contribute to the arms race. It may be a situation where the price of a mistake or misunderstanding could be fatal.