The Soviet “Dream”. How to create the heaviest aircraft in the world 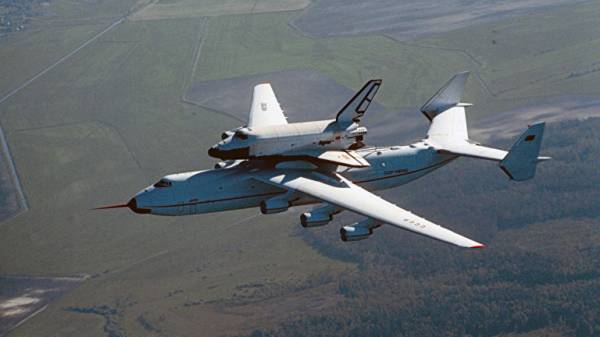 This giant was created within the project of the Soviet space industry, “Energy-Buran”. Still in the world created a more perfect and outstanding by its characteristics of the aircraft. About how all Union built “Dream” — in the material RIA Novosti.

The rise of heavyweight

The an-225 has rolled out the Assembly line on 30 November 1988. Less than a month the first flight. The aircraft spent in the air more than an hour and successfully landed. The actual characteristics coincided with the design, and the test pilots called the “Mriya”, a very good machine. In March 1989, the An-225 took off already with a 156-ton cargo on Board, ahead of the absolute record of carrying capacity — the American freighter “Boeing-747−400”.

During this flight the An-225 set 110 world records. And in may of the same year, “Mriya” has used for its intended purpose: the aircraft was delivered to Baikonur the space Shuttle “Buran” weighing 60 tons.

Then was triumph at international air shows. “The dream” was shown in France, Canada, Czech Republic, great Britain and the United States. The brainchild of Soviet engineers, his size and strength impressed the whole world. Mriya admired and specialists, and those who were not related to aviation. Despite the incomplete test, the plane began to perform commercial flight in may 1990 from Chelyabinsk to Yakutia was delivered hundred-ton tractor T-800.

After the world presentation developers Mriya began to receive various proposals for the development of the project, including rather exotic. So, according to the memoirs of chief designer of the An-225 Anatoly vovnyanko, one of the foreign businessmen proposed to make of the “Mriya” three-deck passenger liner, which would have been equipped separate cabins for businessmen and newlyweds, comfortable cabins to other passengers, duty free shops, restaurants and a casino. Such a plane could fly on the route Sydney — London — Tokyo — Sydney. “Even then I thought very easy to arrange maintenance and to provide a resource of ship, since the flight time and payload of a small,” recalls vovnyanko.

The project of the Union scale

Before the advent of “Mriya” missiles and large items transported to the launch site on a specially modified for this purpose bomber ZM-T and An-124 “Ruslan”. In the first stage of designing the system “Energy-Buran” parts were also delivered to Baikonur these aircraft. However, the Assembly at the launch site would significantly increase the cost of the project and slowed down development. So I decided to build aircraft capable of carrying the booster, and the “Buran” already assembled.

Work on the new freighter was launched in 1985 at the Kiev mechanical plant (KMP) named after O. K. Antonov. Took the smaller An-124 aircraft. Its fuselage lengthened by seven meters, and due to the increased mass and gain two engines three times increased the size of the wing. The tail Assembly is made the posted below on the fuselage could accommodate long cargo, in particular, the Central unit of the carrier rocket “Energy”. Special attention the designers paid landing gear: struts was fourteen, and the last three rows made rotatable, to a huge machine was able to turn around on the runway with a width of 56 meters.

To create a “Mriya”, the designers took only two and a half years.

Total plans to build two aircraft flying prototype and the second sample for strength tests. Final Assembly of the An-225 was carried out in CMH, however, the development of aircraft and manufacture of components involved dozens of other businesses: the chassis was produced at the Nizhny Novgorod plant “Hydromash”, large power frames, brackets of the fuselage, some serial components and parts of the An-124, which were installed on the An-225, — Ulyanovsk. The nose part is made of the Kyiv aviation industrial Association, and the Central part of the wing produced in Tashkent. In General, the development involved all leading aviation enterprises of the Soviet Union and thousands of engineers, designers and testers.

However, the “Mriya” worked long — in 1994, the giant was laid on the airfield in Gostomel, Kyiv region. The plane took off engines and equipment to perform commercial flights. To this point on account of “Dreams” has 339 flights, including more than a hundred test. With the closure of the program “Energy-Buran” and the collapse of the Soviet Union further work on “Mriya” stopped. The demand for air travel particularly large monolithic cargo tends to zero, and Ukraine, which “inherited” went to the plane, could not find financial resources for maintenance and development of the project. Unique the car was simply not needed. The second copy of the An-225 is still only half built.

However, in the early 2000s, began to receive requests for transportation of heavy bulky cargo, and Ukrainian aircraft manufacturers managed to bring the An-225 in a sense. In may of 2002 after a series of tests the aircraft was certified and is currently owned by “Antonov Airlines”, periodically performing commercial flights.

It was reported that the production of the An-225 will start in China — there had allegedly received from Ukraine’s drawings and other technical documentation. In “Antonov” denied this information, stating only the conclusion of an agreement with the Chinese Aerospace Industry Corporation of China (AICC) for the completion of the second Mriya and the possibility of joint serial production of the An-225.