The Patriarch: Constantinople sided with the persecutors of the canonical Church of Ukraine

MOSCOW, December 21. /TASS/. Ecumenical Patriarch Bartholomew has actually encouraged the persecution of the canonical Ukrainian Orthodox Church, agreeing to the establishment of new Church structures. On Friday said the Patriarch of Moscow and all Russia Kirill at the session of the diocesan Assembly of Moscow. 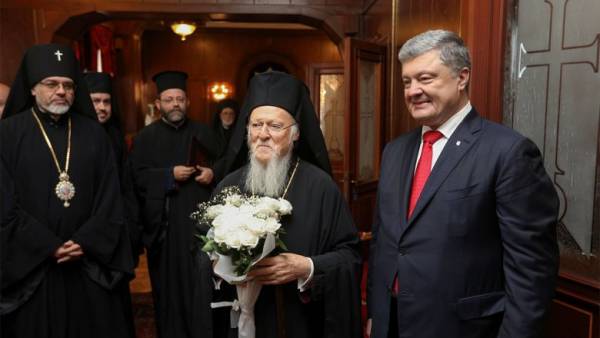 “In fact, the Synod of Constantinople and his Patriarch sided with the persecutors. I say this with great pain. We are talking about ecclesiastical authority of the local Church, which was our mom. About the people I’ve met, prayed, and sought a common understanding of what serves the unity,” he said.

The Primate of the Russian Orthodox Church noted that with the increasing pressure on priests and faithful of the canonical Church, the Ukrainian authorities tried to distance themselves from their citizens.

“While the pressures on our brothers, bishops, clergy, monastics and laity of the UOC, not wishing to participate in anticanonically endeavours of politicians and schismatics, in reality only increased and increased, senior officials of the state increasingly began to publicly state that believers of the canonical Church — strangers, they have no place in their country. And we are talking about the millions of citizens of Ukraine”, — said the Patriarch.

He stated that attempts to split the Orthodox world occurred on the anniversary of the baptism of Rus.

“Even 1030-anniversary of the baptism of Rus… some politicians and supported by the leaders of the schism tried to use that as an excuse to split our Church. And the saddest thing is that in this endeavor they were supported by the Patriarchate of Constantinople. While representatives of local Orthodox churches arrived in Moscow and Kiev in order to pray and celebrate with us, the messengers of Constantinople were occupied by another, they communicated with secular leaders and with people who are far from the Orthodox Church,” the Patriarch said and urged to pray for peace and unity in Ukraine.

The split in Ukraine