Astronomers have photographed the “snow lake” on Mars

MOSCOW, 20 Dec — RIA Novosti. The probe “Mars Express” celebrated 15 years of operation in orbit around Mars, getting detailed and very beautiful pictures of the crater of the Queen, filled with a huge number of frozen water. His images have been published on the website of the European space Agency. 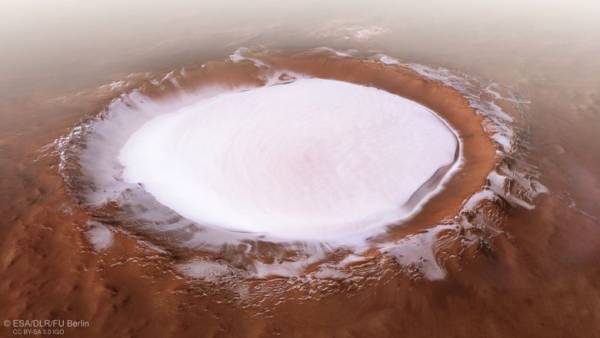 The European Orbiter “Mars Express” was launched from Baikonur cosmodrome on 2 June 2003 and reached Mars on 25 December 2003 and since then is drawn to the Mars orbit. In addition to the study of Mars spacecraft gathered a lot of data on Phobos, with whom he regularly approaches.

InSight Probe took the first “selfie” on the surface of Mars

This apparatus, as the researchers note, is one of the leading roles in the study of the ultimate mystery of Mars mystery of the disappearance of its huge water reserves. The fact that today scientists believe that on its surface in ancient times there were rivers, lakes and entire oceans of water, which contained almost the same amount of liquid, like our Arctic ocean.

Most of this water subsequently evaporated in the space along with the atmosphere of the red planet. Only a small portion of it preserved in the polar ice caps and vast underground deposits of ice in temperate and polar latitudes, the recently opened probes MRO and “Mars Express”.