“Snow leopards have long been hunted. We Casatorie job, everybody gets married and working not find, says Mergen. To feed than it is necessary, therefore, hunted”. 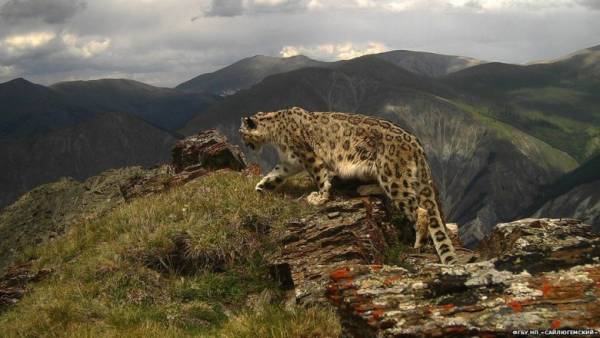 A former hunter and now a guardian of the snow leopard Mergen Markov leads the film crew of Bi-bi-si, on mountain paths, to show the places on the border with Mongolia, Kazakhstan and China, home to snow leopards, they are the same ounces.

Several former poachers have become participants of the WWF Russia and help to monitor one of the most secretive animals in the world.

Mergen Markov is one of them. Men in his family for centuries was hunting in the valley Argut in the Altai mountains, the heart of the land of the snow leopard in Russia.

The snow leopard is endangered, so hunting for snow leopard is prohibited everywhere in the world. Scientists estimate that in the wild were 4 thousand individuals, about 80 of them live in Russia.

Father Mergen mostly hunted wolves, after all, in Soviet times, the local kolkhoz gave one calf, three wolf skins. After the collapse of the Soviet Union to take the fur was nowhere to go, but on the black market there are a lot of people willing to buy the skin of a snow leopard.

To kill for a Mat by the bed

“It mostly bought [for sending] in China, some rich people like the skin of a snow leopard that she had it either on the wall or that it was some kind of rug by his bed,” says Alex Kuznecow, researcher of the national Park “Saylyugemskiy”.

In 2000 years, environmentalists have sounded the alarm. In 2010, Kosh-Agach district, where still lived the leopards, created a protected area of national Park Saylyugemskiy. Poachers became more difficult to hunt in these places.

However, residents of nearby villages Argut Dzhazator still didn’t work — and some “Barsanti” continued hunt. Environmentalists realized that the problem of poaching another approach is needed.

In 2012, they attracted Mergen to work with traps. He took the snow leopard.