PERM, 18 Jul — RIA Novosti. Motovilikhinskiy district court of Perm has sentenced one of the Teens accused in the attack on the school, to 9 years and 8 months in a correctional colony, the correspondent of RIA Novosti news from the courtroom. 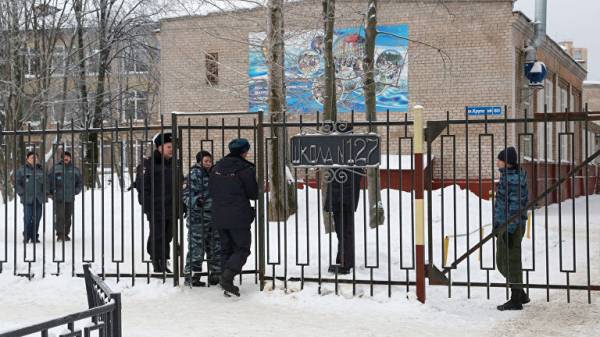 In January, the Perm school № 127 there was a fight with a stabbing, which injured 10 people, among them fourth — grade students and teacher. The suspects in the attack two teenagers were detained after treatment in hospital, they were taken to jail and sent on it is judicial-psychiatric examination.

Consideration of criminal case concerning one of the Teens began in late October behind closed doors because the defendant is a minor. The teenager was charged with three crimes. Former 17-year-old student of the school, in particular, was accused of committing with an accomplice in the attempted murder of 30 persons, among whom were 9 young students and a teacher, who received multiple stab wounds, as well as 19 young students. In addition, he was accused of intentional destruction of property of the school arson and the assault on the security guard school with a subject similar to the gun.

At the beginning of the trial the defendant’s lawyer Stepan Ovchinnikov told reporters that his client was remorseful. According to Ovchinnikova, the teenager admitted his guilt in the Commission of arson and partly in the attempted murder. The defendant not pleaded guilty to the robbery, because this incident happened over half a year before the attack on the school.

By results of consideration of materials of criminal case as a final sentence, the representative of state charge asked the court to determine the teenager in a young offenders ‘ institution for a period of 9 years, 10 months and impose on him a fine of 40 thousand rubles. In addition, the prosecution asked the court to oblige the suspect to be observed and treated by a psychiatrist in an outpatient setting, as well as to fully satisfy the claims of the victims.