The representative of the Philippines won the title “Miss universe — 2018”

BANGKOK, December 17. /TASS/. The representative of the Philippines Catriona gray has won the title “Miss universe” at the 67th international beauty contest held in the Bangkok exhibition centre Impact Arena. This decision was made on Monday, the jury of the competition. 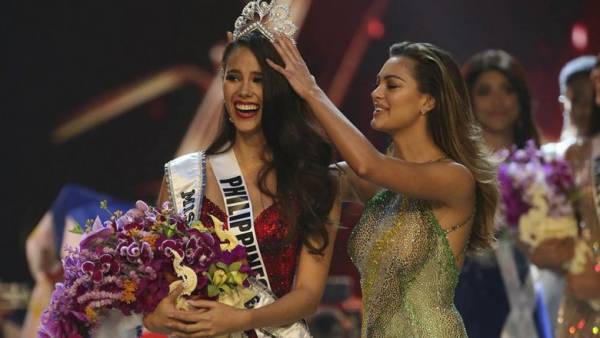 Crown the winner of this year handed native South Africa demi-Leigh Nel Peters, who won the “Miss universe — 2017” in the United States.

First, the jury announced all the contenders for the crown, then chose 20 of the most distinguished and ultimately selected the top three, among whom were representatives of South Africa, Venezuela and the Philippines.

Russia at competition was represented by the inhabitant of Cheboksary — the winner of the title “Miss Russia — 2018”, the 18-year-old Julia Palakihin, which was not included in the top twenty.

During the event, the audience also were presented with video clips of the intermediate stages of competitions. The latter consisted of impressions of swimwear and evening dresses. At the end of each of the girls was asked the final question, the answer to which influenced the final decision.

The international beauty contest “Miss universe” is an annual and one of the most prestigious in the world, along with “Miss World”, “Miss international” and “Miss Earth”. It is held since 1952. In November 2017 66th contest “Miss universe” was held in the United States. In Thailand, the event was held twice — in 1992 and 2005, the Thai candidate won the contest in 1965 and 1988.