Elena Yampolskaya offers to remember the Nazis with a condemnation

MPs want to amend the law “On perpetuation of Victory in great Patriotic war”. 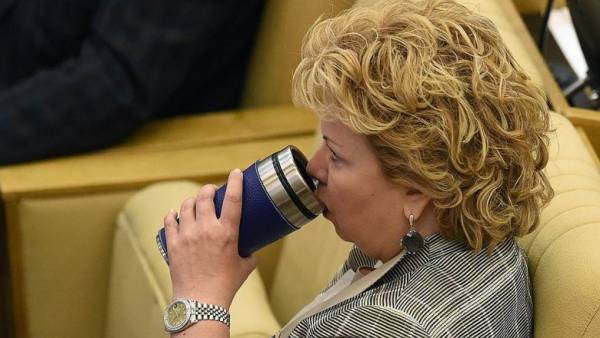 A group of state Duma deputies, among them Deputy speaker Peter Tolstoy and the head of the Committee for culture Yelena Yampolskaya, offered to allow the use of Nazi symbols in works of culture, art and media. This amended anti-extremist legislation, the Code of administrative offences (Cao) and the law “On perpetuation of Victory in great Patriotic war”. Condition the use of symbols MPs propose to make a “formation of negative attitude to the ideology of Nazism.”

The package of amendments was made by a group of state Duma deputies, among them Deputy speaker of the lower chamber United Russia Pyotr Tolstoy and his companion in the party, the head of the Committee on culture Elena Yampolskaya. Under the amendments signed by the representatives of other factions, for example, the first Deputy Chairman of the culture Committee of the Communist Vladimir Bortko, and deputies from other factions.

Deputies de jure propose to allow the use of Nazi symbols in works of culture, art and media.News

, Russia submitted to the UN a draft resolution on combating glorification of Nazism

According to part 2 article 6 of the law “On immortalizing the Soviet people’s Victory in the great Patriotic war of 1941-1945” in the Russian Federation “it is prohibited to use any form of Nazi symbols like insulting the multinational people and the memory of suffered in the great Patriotic war victims.” Itself of article 6 of the law on “fight against fascism”. The law proposed rewrite, adding this rule with a few exceptions, when symbols, emblems or symbols similar to “Nazi paraphernalia or symbols confusingly”, can be used. In particular, “in the works of science, literature, art, mass media, training and educational purposes by educational institutions”, but with “condemnation of Nazism, formation of negative attitude to the ideology of Nazism and the absence of signs of propaganda or justification of Nazism.”

Based on the current wording of the law, the ban may be subject to “all documentaries (including the military newsreel) and feature films, books, paintings, educational and scientific benefits, photos from museums etc., allowing images of Nazi paraphernalia or symbols in the overall context of works about the great Patriotic war”, the authors of the bill in the explanatory Memorandum.

As argument, they cite the titles of works to be prohibited. In particular, the film “Ordinary fascism”, the TV series “Seventeen moments of spring” and others.

The current regulations prohibit a demonstration of attributes or symbols of organizations which collaborated with organizations “recognized criminal or guilty of crimes in accordance with the verdict of the Nuremberg Tribunal,” reads the explanatory note. But this change nothing-MPs is proposed.

To punish the use of symbols collaborators proposed in 2014. Then amendments to the law “On perpetuation of Victory in great Patriotic war of 1941-1945” and Cao made it possible to introduce penalties for the use of symbols of organizations that once cooperated with the Nazis. The author of the initiative was the Deputy of “United Russia” Sergei Zheleznyak. Then there were fears that in the event of the adoption of the law the sanctions can fall symbols collaborated with the Nazis Russian liberation army led by Andrey Vlasov, whose soldiers as a distinctive sign was used by the Russian tricolor. Mr Zheleznyak noted that “the flag was used long before Vlasov and in the mass consciousness is not associated with this organization, in contrast to the symbolism of Bandera”, which the deputies first tried to ban.

The authors made today of the bill state that “the introduction of exceptions to the use of Nazi symbols and paraphernalia in these areas poses no public danger.”