KIEV, December 6. /TASS/. The Verkhovna Rada approved the decision of the President of Ukraine Petro Poroshenko about the non-renewal of the Treaty on friendship, cooperation and partnership between Ukraine and the Russian Federation, which will terminate April 1, 2019. 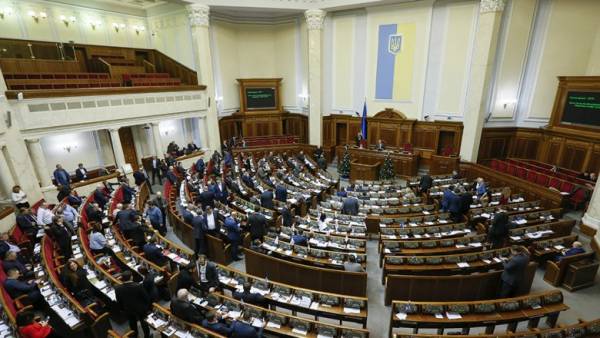 The corresponding bill introduced by the Ukrainian President on Thursday, supported 277 parliamentary deputies, while 226 votes required.

“Cease from 1 April 2019, the Treaty on friendship, cooperation and partnership between Ukraine and the Russian Federation”, — stated in the text of the bill. The law shall enter into force on the day following the day of its publication.

Meanwhile, the decree Poroshenko about the non-renewal of the agreement with Russia was published on 17 September this year. Two days later, a document formally entered into force. September 24, the Ukrainian foreign Ministry has sent a relevant notification in dipvedomstva Russia. However, later experts pointed out that in this case was a violation of procedure, since the entry into force of the decree must be approved by the Parliament. In this regard, as noted by political expert Ruslan Bortnik, the submission by the President of this bill in Parliament in December is only propaganda.

“The bill on the rupture of the Treaty of friendship with Russia is the technical action of the authorities from which she tries to sculpt a new media victory,” wrote Bortnik in Facebook on Tuesday. That is why Parliament began to consider this question in December — during the preparations for the presidential elections, and not decided in September, when the decree approved by the Council of national security and defense of Ukraine and signed by the President.

In any case, the agreement with Russia will apply until 1 April 2019, but the “gap” has long turned into a political show that does not at all affect the lives of Ukrainians, but diverts attention the last four years. Ruslan Particolareggiati about friendship

The possibility of termination of key agreements with Russia began to be discussed almost immediately after the state coup in the country in the winter of 2014. However, until recently the Ukrainian authorities have avoided this step for fear of legal effects. Experts pointed, in particular, that the Agreement, among other things, fixed the border between the two countries. In the end, it was decided to wait until the end of validity of the document and to declare it not to extend that, according to Kiev, should mitigate the impact.