Moscow. 5 Dec. INTERFAX.RU — Chairman of the state Duma Vyacheslav Volodin said that the current Ukrainian President in the pursuit of the preservation of personal power puts the world on the brink of war. 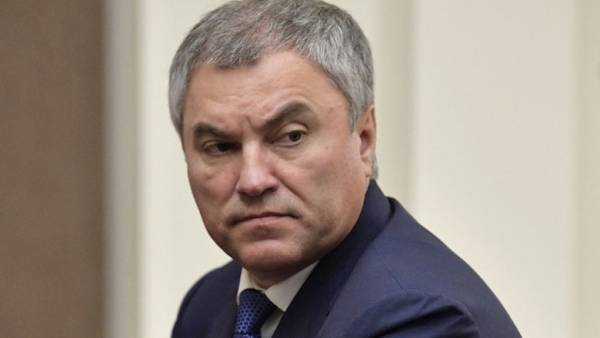 “These dictators (Poroshenko) has no place in Europe, such methods can not fight for power,” Volodin told journalists, commenting on the situation in Ukraine on the background of the events in the Kerch Strait.

“In pursuit of the preservation of personal power he (Poroshenko — if), in fact, puts the world on the brink of war, but whether it is the Europeans, whether it is Europe, it is necessary to discuss” — said the speaker of the state Duma.

Answering the question of foreign journalists about the relation of the incident in the Kerch Strait and to calls to release the detained Ukrainian sailors, Volodin said: “in our opinion, this is a provocation that aims at the preservation of personal power of the President of Ukraine”.

“Given that the legitimate chance to be elected he (Poroshenko) no, today its ratings are so small that it is not included even in the top three popular politicians in Ukraine, he is doing everything to maintain personal power”, — said Volodin.

25 Nov in the Kerch Strait, the Russian border guards with weapons detained three ships of the Ukrainian Navy bound for the sea of Azov. Several Ukrainian sailors were injured. In connection with the incident in Russia, a criminal case under article “Illegal crossing of the state border”. Ukrainian sailors arrested.