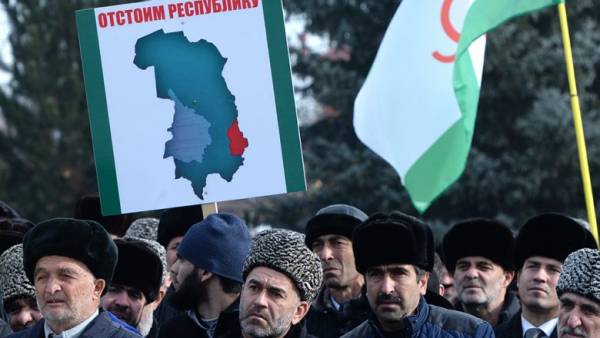 Ramzan Kadyrov: “the Caucasus and Russia as a whole need to unite, not to erect posts”

According to the constitutional court of the Russian Federation, the existing borders between the subjects can be changed during the transmission some part of the territory with their mutual consent and approved by the Federation Council. Since the border between the two neighboring entities was absent, we are not talking about changing the affiliation of a territory, and their establishment, recognized the COP, deciding that the approval of the Chechen-Ingush border, the Federation Council was not required.

The border between Ingushetia and Chechnya, the need to determine which stemmed from the law of the Russian Federation, 1992 “On formation of the Ingush Republic…”, after the transformation of the Chechen-Ingush Republic, to the agreement dated 26 September was not determined. This is confirmed by the Federal law “On measures of organization of local self-government in the Republic Ingushetia and the Chechen Republic” in which the question of the border between the newly formed entities are not affected, according to a decision of the constitutional court.

The authorities of the subjects of the Russian Federation is entitled to establish a municipal entity in its territory. While the borders of Ingushetia is not defined, not fixed and boundaries of municipalities, neighboring with Chechnya, decided by the COP.News

From Republic to Republic

Otherwise would allow the population of municipalities to block the fixing of boundaries between neighbouring regions. The issues of organization of local self-government, the COP considered secondary to the issues of defining the boundaries of constituent entities of the Russian Federation.

The Constitution does not directly establish the cases in which the conduct of subjects of the referendum to address issues related to their territorial organization is a must, says the decision. The Constitution of Ingushetia will consider the views of the population of the territory concerned only with the change of borders between subjects of the Russian Federation. Any provisions about the referendum during the primary solution to the issue of the border with other subjects of the Russian Federation it does not contain, is recognized by the COP.

The opposition, recall, claims that the current border was changed. But the COP recognized that the referendum had been required.News

The COP refused to recognize a violation of the Constitution and deviation from the procedure for the adoption of the disputed acts of the Parliament of Ingushetia, as urged by opposition MPs. The law “On approval of the Agreement on the establishment of the border between the Republic of Ingushetia and the Chechen Republic” — a special law, containing only two articles, of which this agreement is approved and shall be enforced. Because of this, there will be no change in the concept of the bill or adding deputies edits to the text decided by the constitutional court.

In the end, the Federal constitutional court ruled that the constitutional court of the Republic of Ingushetia has wrongfully terminated the contract, restoring the challenged action of the border. This position is fully consistent with the position of the heads of Chechnya and Ingushetia, as well as speaking on 27 November in KS representatives of the President and Federal authorities.