The reasons for this appeared after the confessions of the former lawyer of the President of the United States. 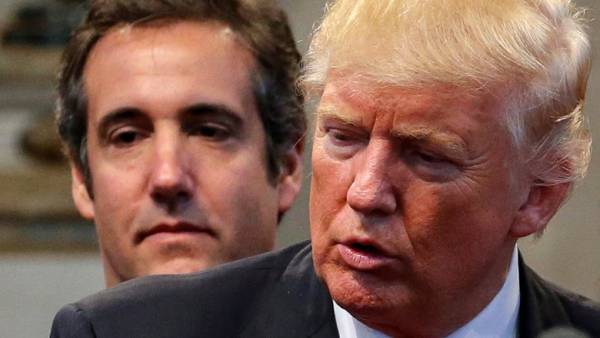 The former personal attorney of the President of the United States Donald trump Michael Cohen has asked the court in new York city not to sentence him to prison, confessing a lie. He said that negotiations on the construction of the Trump Tower in Moscow in fact conducted until June, and not until January 2016, that is already during the election campaign. Democrats in Congress have already stated that such evidence ex-lawyer Donald trump can attest to the fact that the Kremlin “still possesses tools of influence” to the President of the United States.

The former lawyer for Donald trump and many years Vice-President of the Trump Organization Michael Cohen attempted to avoid prison, confessing that his previous testimony was false. After Mr Cohen was involved in the investigation of a possible Moscow’s intervention in the U.S. presidential election of 2016, requires the lawyers to him.

Thursday, November 29, Mr. Cohen without an invitation appeared in court for the southern district of new York and unexpectedly pleaded guilty to making false statements to members of Congress about plans to build the Trump Tower skyscraper in Moscow and his talks with Russian officials. Late Friday night, attorney Michael Cohen submitted to the court a further statement, asking not to sentence him to prison. According to the defense, he has completely redeemed himself by agreeing to cooperate with investigators from the team of spectacular Robert Mueller, in charge of “Russian business”.

Recall that, speaking last year at a hearing of the joint congressional Committee on intelligence, Michael Cohen said that all attempts by the Trump Organization to start a development project in Moscow was terminated in January 2016, long before the nomination of Donald trump for President of the United States. According to him, plans to build the Trump Tower in Russia knew “a few people”.

In documents submitted to the court at the end of last week, attorneys Michael Cohen has officially acknowledged that talks with potential partners in Moscow was carried until the end of June 2016, and the number of recipients of calls ex-lawyer and his business partners, he was the press Secretary of the President Dmitry Peskov and one of his assistants.

Himself Michael Cohen now claims that in the course of these talks has consistently “followed the instructions” received from Donald trump, and informed him about the progress of all negotiations, including discussion of a possible project with Dmitry Peskov.News

From yellow cab to the interrogation spectacular

Previous false testimony to members of Congress due to the fact that Mr. Cohen, as a “loyal ally and the representative of the “Client-1”, was forced to do so to support the political status of “Client-1″”. According to experts, under the name “Client-1” and the address of the lawyers and the investigative team documents Muller featured Donald trump.

However, immediately after recognizing Michael Cohen of lying US President, in recent years, has repeatedly stated that he never had any business interests in Russia, and he acknowledged that I was well aware of negotiations about the construction of the Trump Tower in Moscow. He wrote on Twitter, calling the plan for the construction of the Trump Tower in the Russian capital “very legal and very cool.” “I continued to direct his business at a time when there were (at the presidential level.— “B”) campaign — said Donald trump, answering questions of journalists.— Then there was a large probability that I will not win, and then I’d have to get back to business. So why did I have to lose numerous opportunities?”.

His former lawyer, the President of the United States called a “weak person”, explaining that Michael Cohen “is lying about the project, which was known to all”, in order to mitigate the possible punishment for yourself.

In August Michael Cohen has already pleaded guilty to tax evasion, Bank fraud and violating laws on campaign funding. These charges were associated with another investigation against Donald trump that maintains the Prosecutor’s office for the southern district of new York.

Kerch or investigation Muller: what was the reason for the cancellation of the meeting between Putin and trump?

In documents submitted to the court at the end of last week, attorneys Michael Cohen emphasized that their client twice “voluntarily” met with representatives of the Prosecutor’s office of Manhattan and held seven meetings with the investigators from the team of spectacular Mueller, answering questions “for more than 70 hours.” The last of these interrogations was held last week. Said attorneys Michael Cohen and the fact that their client, again “voluntarily” met with the staff of the office of the attorney General of the state of new York, leading another investigation in respect of a charitable organization Donald J. Trump Foundation. Among the possible defendants in the case of financial fraud and tax evasion involve himself Donald trump, his sons Eric and Donald Jr. and daughter Ivanka.

In addition, in his address to the court, the lawyers, Michael Cohen feel the need to mention that their client “was transferred to the office of the attorney General of the state of new York documents” related “to another ongoing investigation,” without explaining what exactly was going on. The former lawyer of the US President also met with representatives of the Department of taxation and Finance of new York state, investigating allegations of fraud brought against Donald trump and his educational institution, Trump University.

Commenting on the recent statements of the President and consent of Michael Cohen to work with a team of spectacular, Democrats in Congress said: “the new information” may indicate that the Kremlin “still possesses tools of influence” to the President of the United States.

Congressman Adam Schiff, who is considered the most likely Chairman of the Committee on intelligence in the new composition of the house of representatives, on Sunday said in a broadcast on ABC that he does not consider the construction of a skyscraper in Moscow, the “lawful and good.”

“In order for this transaction took place, it was necessary to cancel sanctions against Russian state banks, — said Mr. Schiff.— This means that the President in the event of his victory or defeat had hoped to earn money in Russia and tried to enlist the support of the Kremlin.”News

Peskov told about the letter of the priest in the Kremlin

In conversation with the correspondent of “Kommersant” last summer, former coordinator of sanctions policy, U.S. state Department Ambassador Daniel fried confirmed that in the first days after joining the White house, members of the new administration really considered the possibility of lifting sanctions against Moscow. “I was not pressured, he said.— But I have the impression that some members of the administration trump, the White house, looking for the possibility of lifting sanctions unilaterally, for no reason that I would consider convincing.”

Possible the head of the legal Committee of Congress, Jerrold Nadler, speaking live on NBC, said that “the President lied to the American people about their business ties with Russia”. “In the Kremlin knew that he was lying, and this gave the Kremlin the ability to influence it, — said the Congressman.— The question now is only preserved if these tools of influence and you know in the Kremlin on other occasions, when the President lied”.